New PUMA CEO Koch: Jamaica is in our DNA 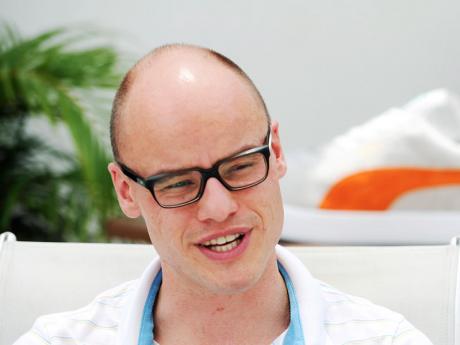 Franz Koch, PUMA's new CEO, being interviewed by The Gleaner at the Spanish Court Hotel on Thursday.- Ricardo Makyn/Staff Photographer

Donning bright-blue jeans and an air of familiarity, Koch took time from his busy schedule to underline his company's commitment to Jamaican track and field, the upcoming Olympic Games, 'Champs', Usain Bolt and just about everything PUMA, during a specially arranged one-and-one chat with The Gleaner at the Spanish Court Hotel in New Kingston.

"Let's talk outside instead, it's nice and warm out there," Koch offered, a first-time visitor to the island and already a big fan of Jamaica's renown warmth.

He is also a huge fan of the country's athletics, and was out of the blocks in convincing fashion, preaching his company's ethos of mixing fun with performance and underscoring his company's appeal towards the island.

"Our relationship with Jamaica is long-term and very important," said Koch. "Jamaica has become a part of our brand DNA I would say, it is such a perfect fit in terms of the lifestyle and the sport, and the expression of joy which is the ultimate buzzword when it comes to PUMA."

"We are all about joy, whether it's sports or lifestyle and so is Jamaica, so you can see the perfect fit," he added, before speaking to the relationship with Bolt, the world-record holder and Olympic champion over 100m and 200m.

"Usain (Bolt) is such a great performer and an excellent sportsman but he always enjoys what he is doing and have fun while competing, that's a perfect example of what PUMA represents," said Koch.

"Obviously, I have heard and seen so many things about Jamaica in the PUMA world in terms of the music and culture but it's just great to experience it all first-hand being here on the ground and I can't wait to see Champs," he added, a sip of water a possible indication that the blazing Kingston heat was beginning to take its toll.

Koch, who is just in his early 30s, joined PUMA in 2007 as global strategic planner, his new role requires a bit more, but he has taken the plunge and is ready to make the most of the opportunities.

"It has been an interesting experience so far, it's been exciting," said Koch. "I have taken some time to travel a lot to our marketplaces to get a better understanding of the appreciation of the PUMA brand on a larger scale, to build relationships with our various local teams and also, I have talked a lot with our partners at the international level to better understand what is going on.

It's really an exciting opportunity for us to write this next chapter of PUMA," he noted.

A big part of that next chapter will be fast-rising 400m hurdler Ristananna Tracey, who was also welcomed to the company after signing a four-year deal which will see her endorsing the brand's performance and lifestyle apparel going into the 2016 Olympic Games.