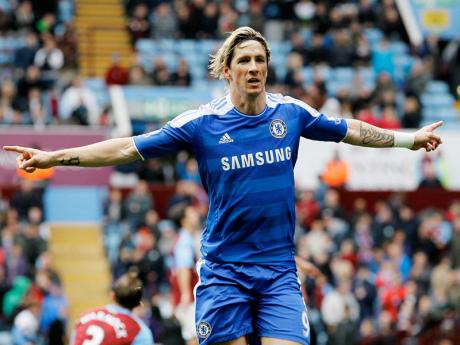 Chelsea's Fernando Torres celebrates after he scores a goal during the English Premier League match between Chelsea and Aston Villa at Villa Park Stadium in Birmingham, yesterday. Chelsea won 4-2.- AP

LONDON (AP):Manchester City missed the chance to put pressure on Premier League leader Manchester United yesterday when they stumbled to a 3-3 draw against Sunderland that ended their record home-winning streak.

With United not in action until tomorrow, City could have drawn even on points with the defending champions with a Premier League-record 21st straight home win.

Instead, City needed two goals in the last six minutes to salvage a draw.

Sebastian Larsson scored twice and Nicklas Bendtner added a goal to give Sunderland a 3-1 lead before Mario Balotelli scored his second of the game for City and Aleksandar Kolarov tied it in the 86th minute.

Third-place Arsenal lost 2-1 at Queens Park Rangers and Chelsea scored twice in the last six minutes to win 4-2 at Aston Villa. Fernando Torres scored his first Premier League goal in six months as Chelsea kept up their challenge for a top-four finish.

City have 71 points to United's 73. Arsenal have 58 after former Tottenham midfielder Adel Taarabt, with his first Premier League goal, and Samba Diakite scored for QPR. Theo Walcott got Arsenal's reply.

With captain Stiliyan Petrov watching from the stands following his diagnosis with leukemia, Villa fought back from a two-goal deficit to tie it 2-2 before Branislav Ivanovic and Torres clinched a win that moved Chelsea two points behind fourth-place Tottenham.

Daniel Sturridge and Ivanovic put Chelsea ahead before James Collins and Eric Lichaj tied it for Villa.

Sidelined since August until a week ago because of hip surgery, American defender Lichaj scored his first Premier League goal in the 80th. It was the second goal at Aston Villa for Lichaj, who also scored in the League Cup last August 23. He had not started a Premier League match since December 28, 2010.

It was Chelsea's sixth win in eight games under interim coach Roberto Di Matteo. Spurs can restore their lead over their London rivals to five points if they beat Swansea today.

Everton are seventh after a 2-0 win over West Bromwich Albion and Clint Dempsey scored his 13th Premier League goal of the season to help Fulham beat Norwich 2-1.

Dempsey's tally is the most for an American in one season and one more than he had in 2010-11. Dempsey has 19 goals in all competitions.

Also, Wigan boosted their chances of avoiding relegation with a 2-0 win over Stoke, and last-place Wolverhampton Wanderers look sure to be demoted after a 3-2 home defeat against Bolton.