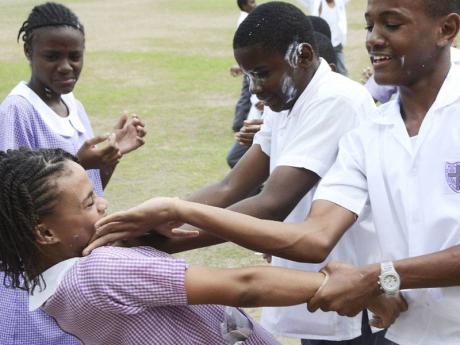 by Garth A. Rattray

I'VE BEEN here twice before; but the extremely scary Grade Six Achievement Test (GSAT) just keeps coming back to haunt hundreds of thousands of Jamaican families year after year after year.

It's an indictment on our little society that, today, in 21st-century Jamaica, any child with uneducated or under-educated or unmotivated or extremely busy or fatigued parents; any child from a household and/or community with little interest in academia; any child from a school with overcrowded classes; any child whose parent(s) cannot afford all the extra lessons needed to try for high scores on the GSAT is most likely in trouble and set on a predetermined (possibly, underling) path for the rest of his/her life.

A prime example of the subtle bias that we all experience lies in the recent tragic shooting death of the girl from the Immaculate Conception High School (ICHS). Terrible enough that it happened, but the tragedy was amplified by the loss of a child scholastically gifted enough to have secured a place in ICHS and, therefore, expected to have been a contributor to her family and society. In fact, court awards are granted for the loss of a child's life based on what that child was expected to have contributed as a productive adult. Therefore, under similar circumstances, a child from ICHS would usually fetch a higher award than a child from a so-called 'failing' secondary school.

The GSAT is almost like loaded dice and it promotes and propagates societal separateness and even, perhaps, elitism. It widens the chasm between the fortunate and unfortunate. Every year it helps to delineate children via education, opportunity and 'status', it takes a heavy toll on the fragile self-esteem of children in their formative years already struggling with their individual identities and place in this competitive world.

The strain of the GSAT is felt everywhere. I have seen mothers suffer "nervous breakdown" ... extreme anxiety reactions because of the nightmare of their child being placed in an unmentionable secondary educational facility.

Parents and family members morph into teachers and tutors as the GSAT draws near. Some mothers even take leave from work and home school their children during the two weeks leading up to that fateful exam. Haggard, exhausted, irritable, dazed and emotionally burnt-out parents transport their children to extra lessons day in and day out until the GSAT is complete.

Obviously, the only real solution lies in getting all secondary/high schools to the same level of proficiency/efficiency. The only thing that should determine where a child is schooled (in the public system) is the proximity to the home or workplace of the parent(s). Until then, the 'GSAT' system of student assessment is in dire need of a complete overhaul and not just tweaking.

An Assessment of Scholastic Competence (ASC) - or whatever name it should be given - should be spread over three years beginning in Grade 4. At that stage, the child should be assessed by assignments, attendance, quizzes and a small percentage of the mark for the year got from an examination." That year's assessment should not be put towards the ASC, it should only be used as a guide to determine the amount of intervention needed.

All communities should have centres with volunteer tutors and internet-connected computers for which the entire community is responsible. The second and third years of ASC should be similar to the first but the grades put towards the final ASC score ... which ideally should be used to place children according to their aptitude in ANY school (not in certain schools).

No assessment system culminating in a once-in-a-lifetime exam should determine the future of our children and, therefore, our nation.