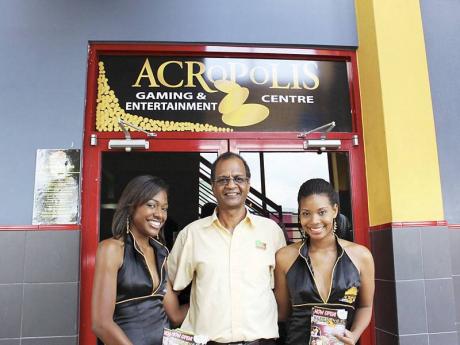 Supreme Ventures Limited is seeking to broaden its grasp of the gaming arena, as the company recently expanded its Acropolis Gaming & Entertainment Centre to Cross Roads, Kingston, pushing the local Acropolis franchise to location number four.

Julian Walker, promotions and business development officer for Supreme Ventures, was at the official launch and opening party on Friday and, according to him, the decision to open a branch in Cross Roads was a good one.

"It was a very good decision. We realised that Cross Roads is a high business traffic area and this is an effort to provide some form of entertainment for these folks, especially for the people in the market. They stay over for the night and there is pretty much nothing to do rather than the cinema. We are right here to provide that form of entertainment facility for them and for everybody else," he said.

Walker said the Acropolis dynasty has been a tremendous one, and that the success of the existing locations has facilitated the decision to open additional branches.

"It is a feasible business. We see where people really like to be entertained and expect the returns, and that is what we are all about. From any branch within the Supreme Ventures, whether it be Lucky 5, Cash Pot ... with win-quick games, there is always a return and people always go for that," he said.

The local church might have a lot to say about the establishment of another so-called 'gambling' facility in the island. However, Walker took the liberty to distinguish between the concept of gambling and gaming.

"We don't necessarily promote or like to use the term 'gambling'. We like to say 'gaming', which represents a more responsible term. We try to entertain people who have that disposable income, primarily who want to come by, sit back and relax. There are a lot of people who want to stop somewhere and de-stress. This is the kind of environment that we provide," he said.

Walker said Cross Roads was a unique location because it is located in what he called a half-way zone, between uptown and downtown, and this, he said, could facilitate some level of integration between two types of audience.

"Everybody might be here. We are not frowning on anybody. That is not our style," he said.

Acropolis will be open for business on Tuesdays to Saturdays from 11:30 a.m. to 7:30 p.m., and Walker promises solid entertainment value for money.

"Some people sell gambling, we sell the entertainment factor of playing our machines. There is a big difference ... . You walk in, whether your pocket be stingy or fat, while you play we provide the entertainment as well as give you some refreshment to keep you contented, and hope that you have a wonderful evening playing the machines," he said.

He also hinted that the next branch of Acropolis will be at a high-end location in Kingston yet to be announced. Acropolis Cross Roads is located at Shop 8 State Mall, 15-17 Half Way Tree Road, Kingston 5.