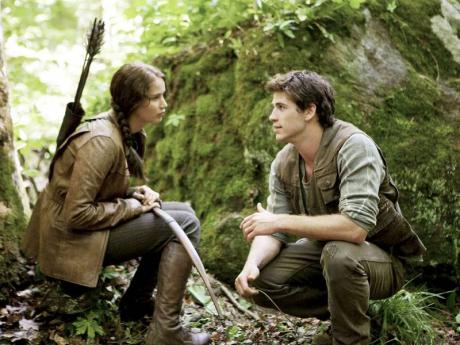 The Hunger Games is still the first item on the menu for movie fans, taking in $61.1 million to remain the No. 1 film in its second weekend.

Studio estimates Sunday put Lionsgate's The Hunger Games well ahead of Sam Worthington's action sequel Wrath of the Titans, which opened in second place with $34.2 million.

That's far below the $61.2 million opening of its predecessor, Clash of the Titans, two years ago. But distributor Warner Bros. opened Clash on Easter weekend, when young fans already were off school and in holiday mode. With Easter coming next weekend, the studio expects Wrath to catch up to Clash in the next few weeks.

Starring Jennifer Lawrence as a teen forced to compete in a televised death match, The Hunger Games lifted its domestic total to $251 million after just 10 days.

"We're obviously ecstatic at that quarter of a billion - I like the sound of that, by the way," said David Spitz, head of distribution for Lionsgate. "We're going into a period now with Easter weekend and spring break where literally 30 per cent of kids are out of school starting tomorrow. ... We have a great opportunity to continue to play and play and play."

The Hunger Games shot past Dr. Seuss' the Lorax ($189.6 million domestically) to become the top-grossing film this year.

Wrath of the Titans had a smaller domestic opening than 2010's Clash, but the sequel was the top draw overseas with a debut of $78 million in 60 markets. That gave it a worldwide total of $112.2 million.

Sherlock Holmes: A Game of Shadows opened earlier in the month and to much smaller crowds than the first movie, which premiered over the busy Christmas weekend. Yet Game of Shadows held on longer in subsequent weekends, its worldwide haul slightly exceeding the original movie.

Likewise, Wrath of the Titans should hold up better than Clash over Easter and the following weeks, Fellman said.

"We're going to get there. It's just going to be in a different pattern," Fellman said.

The sequel stars Worthington as ancient Greek hero Perseus in a battle of gods and men, including Liam Neeson as Zeus and Ralph Fiennes as Hades.

The Hunger Games added $34.8 million overseas to raise its international total to $113.9 million and its worldwide haul to about $365 million.

While lagging behind the overseas business of such teen-based literary adaptations as the Harry Potter and Twilight movies, The Hunger Games is on a pace to surpass the domestic revenues of nearly all of those films.

The Hunger Games is headed well above $300 million domestically, a level reached by just three of the eight Harry Potter films and only once by any of the Twilight flicks.

In limited release, the Weinstein Co. documentary Bully opened strongly with $115,000 in five cinemas, a healthy result for a non-fiction film.

An examination of school bullying, the film benefited from publicity over a campaign asking the Motion Picture Association of America to lower it from an R-rating so that youths under 17 could see it without an adult.

Unable to secure a lower rating, Weinstein decided to release Bully unrated. The film earned the R-rating for language, and film-maker Lee Hirsch said he declined to edit out the offending words because it would have diminished the documentary's impact.

Hollywood's bull market continued, with audiences continuing their run on cinemas. Overall domestic revenues totalled $154 million, up 23.5 per cent from the corresponding weekend last year, when Hop led with $37.5 million.

For the year, domestic receipts are at $2.6 billion, 20 per cent ahead of 2011's, according to box-office tracker Hollywood.com.

By far the biggest movie to open outside the busy summer and late-year holiday periods and the biggest non-sequel debut ever, The Hunger Games alone has given the industry a huge prelude to the blockbuster season that hits its stride in early May.

"If this were a summer movie, these would still be impressive numbers," said Hollywood.com analyst Paul Dergarabedian. "Usually, you'll see sequels in a big franchise like this getting bigger and bigger, but this movie right out of the gate has already become one of the biggest blockbusters of all time."

Estimated ticket sales for Friday through Sunday at US, and Canadian cinemas, according to Hollywood.com: