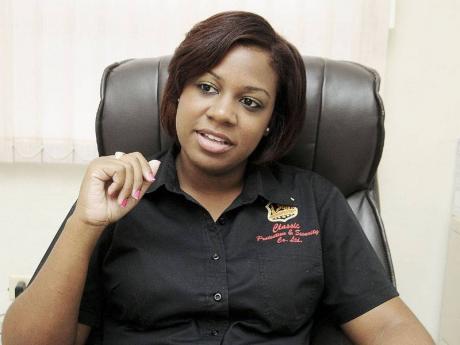 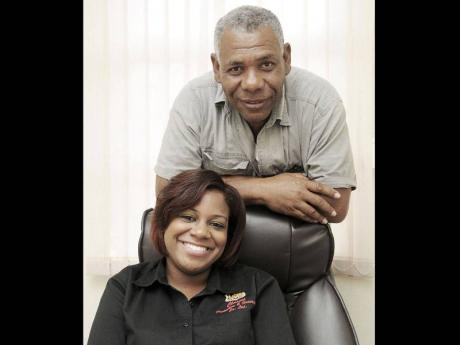 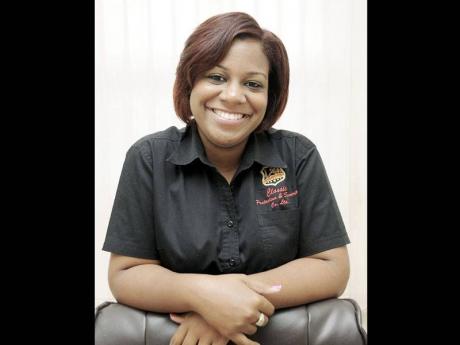 Raquel Peters may be just over five feet tall, but don't dare underestimate her. She is a cut above the rest. At 25 years old, Peters is director of Classic Protection and Security Company Limited, director of International Technology Solutions and accounting clerk for Rich Construction & Equipment Company Limited.

How does she do it all?

"With technology," she joked during a recent interview with Flair. "My assistant is God's gift to bosses, she is on top of things." But technology does play a vital role in her work. She has a desktop computer, beside that an Ipad and a laptop in her bag. "I do everything by email," she confessed.

Her jobs are not just about delegating. "You can't get anything done unless you know the direction you are going and get everyone on board," she explained. Getting everyone on-board is done partly through having monthly staff meetings.

Peters' family and the "good' foundation her parents help her set are the first tools in her arsenal. "My family motivates me," she noted. Nearly every sentence she speaks is punctuated with words of wisdom from her mother and father, Doreen and Richard Peters.

The most fundamental of these sayings she shared with Flair. "Growing up my father always told me, 'you are black and you are a woman, so you are going to have to work harder than everyone else.'" And that she has. Peters holds a first-class honours bachelor's degree in international relations and a master's in governance and public policy. Both her parents hold first degrees and they always pressed their children to outdo them.

"I remember my father towing me to school on a bicycle - he ensured we went to school."

Working in the family business was not the first, choice of careers for Peters. At first she wanted to be a lawyer and was on her way to Harvard Law school. "But there is a brain drain in Jamaica and I thought, what would be left if I left? So I decided to stay because who is going to take care of my parents and give back to Jamaica if not me, if not the young?"

She also wanted to work in the public sector. "I remember during one interview the man said to me,'why do you want to work here? You're smart, you can go in the private sector and make a lot of money'. I decided these are not the people I would want to work with."

But it always came back to her family. "My mother and father worked so hard, so I had to take up the mantle. They sacrificed a lot for us."

During the interview, her father, Richard walked in. He told Flair that as chairman he still oversees everything, but with his daughter there he has less to worry about.

Peters is very straightforward and confessed to Flair that there was resistance to her attaining her current role in the family business. "I don't like the links thing, I like getting things on my own merit. There was some resistance, but they did not know that I started as an accounting clerk and a secretary, so I knew what I was doing. But there were people who went against the tide." She noted that even in her daily interaction with clients, persons are at first surprised by her size, gender and age. So she is always prepared. "If I can't charm them, then I 'take a tone'," she quipped with a smile that comes so easily. She has already developed her own leadership style. "I have an open-door policy because you need to respect your employees and you have to take care of them. When I'm in my bed sleeping, they are the ones up 24/7."

Always being prepared is a trait her parents instilled in her and her siblings. "Whenever we would go out my father didn't like me wearing slippers and would want us to wear our sneakers. He says you never know what can happen so you should always be prepared."

Peters is already on her way to making a difference. An issue that's close to her heart is sexual harassment - the topic on which her master's thesis was based. "Growing up, I knew persons who were sexually harassed. Most persons didn't know they were being sexually harassed, they just knew that they felt uncomfortable." Peters noted that it is prevalent in the workplace. "I know people who have gone through it and it has messed them up." She is an advocate for female empowerment. She figures that her days at Immaculate Conception preparatory and high schools may have influenced her thinking in this area.

"It's something I really want to tackle, and every time I'm breaking that stereotype I'm tackling it."

Breaking gender stereotypes comes naturally to the only girl of four children. She noted that growing up, she didn't have many restrictions. "There was only one restriction and that was with boys," she added with a laugh.

Peters loves her job as director of a security company "I like meeting people. You meet a wider spectrum of people (in this job) and you feel like you're helping them when you give them peace of mind, putting people at ease, letting them know they are safe."

Peters enjoys hanging out with friends on a Friday night but is a confessed homebody who loves to read or rent a movie.

She is also a mentor with Youth Upliftment Opportunities (YOU). "I'm into hands up not handouts," she told Flair, noting that she was planning a fund-raiser for next month, the proceeds of which will go to the organisation and Campbell Town Association. "There are a lot of misguided youths who don't have opportunities who become the gunmen of tomorrow. If we can intervene, we can make it better. It will mean less work for us," she added with a laugh.

Her advice to young women is to be dedicated and determined. "There are some links and relationships that are important, but you have to balance it and have your head on straight and do it in a dignified way or it will come back to bite you."

She continued: "Take the criticism you will get and use it to make you stronger. I was criticised that I'm young and don't have any experience. Remember, who you are at work is not who you are as a person."