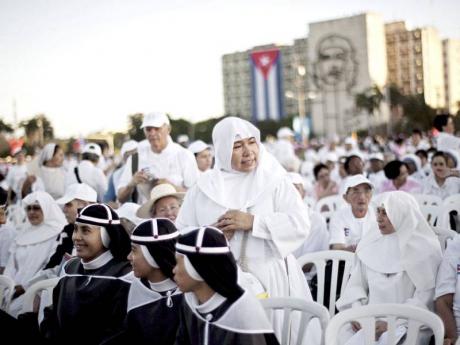 Nuns wait as worshippers gather in Revolution Square for the arrival of the Pope Benedict XVI to celebrate a mass in Havana, Cuba, last Wednesday. Pope Benedict XVI wrapped up his visit to Cuba on Wednesday with an open-air mass in the shrine of the Cuban revolution. 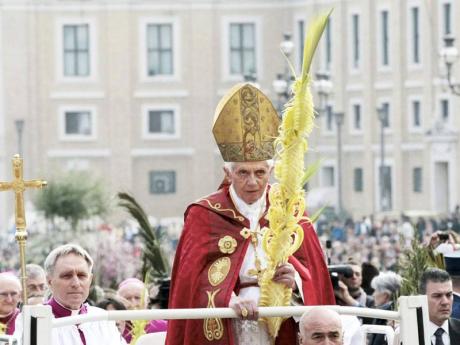 Cuba's communist government on Saturday agreed to Benedict's request to make Good Friday a holiday, a request made during his visit to the Caribbean island last week. The day, which is celebrated this Friday, marks the solemn commemoration of Christ's death.

On Sunday, Benedict traveled into St Peter's Square on the back of a white jeep at the start of Palm Sunday Mass, which marks Jesus' arrival in Jerusalem and inaugurates Holy Week.

The Pope looked rested despite having just returned from an exhausting, six-day trip to Mexico and Cuba, where he met with former and present Cuban presidents, Fidel Castro and his brother, Raúl.

It was during the meeting with Raúl Castro that Benedict asked that Good Friday be made a holiday, even though it isn't celebrated as such in most of Europe and Latin America.

One of the aims of Benedict's trip was to help the local church, which has been sidelined during 30 years of official atheism that ended only in 1992.

After Pope John Paul II's historic 1998 visit to Cuba, the authorities agreed to make Christmas a holiday. Cuba said Saturday a decision on whether to make Good Friday a similarly permanent holiday would be made later.

The pope, who turns 85 in two weeks, has a busy Holy Week ahead of him, with public services Thursday through Easter Sunday.

Benedict directed his Palm Sunday homily to young people, urging them to welcome Christ into their lives as the people of Jerusalem welcomed him.

"May Palm Sunday be a day of decision for you, the decision to say yes to the Lord and to follow him all the way," he said.