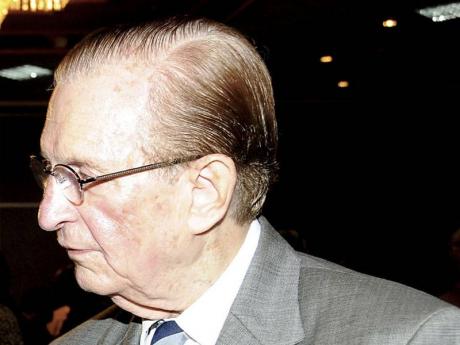 FORMER JAMAICA Labour Party (JLP) Leader Edward Seaga is declaring there is no one in the party that can successfully challenge Andrew Holness for the top job.

"If you look at the results of the elections, all the potential challengers have been losers," Seaga told The Gleaner yesterday.

Holness, in an exclusive interview published in The Gleaner yesterday, said he was gearing up for a fight to remain party leader should anyone attempt to challenge him.

Holness' job as JLP leader has been placed under the microscope following two massive defeats in general and local government elections.

Last week, veteran JLP member Mike Henry, who is on leave as chairman, said the party must decide the kind of leader it needs going forward.

"The precedent has been set by us to have Mr Seaga to continue as leader despite whole heap of defeats," Henry had said.

"The Jamaica Labour Party has allowed leaders to stay despite defeats. They must now decide if the new generation keeps that old-time thinking."

But yesterday, Seaga gave Holness the thumbs up for the approach he has been taking to rebuild the party following the two election defeats.

Seaga said Holness seems to be on the right track overall in bouncing back, but there are persons in the party who need to get their act together or simply step aside if the party is to do well.

"There is a problem in the public relations of the party and there are a lot of persons in there that need to either straighten up themselves or give the party a better chance by leaving," Seaga said.

In encouraging Holness, Seaga argued: "I have gone through worse than this and within six years, we were back on top again. He needs some new blood in the party, people of calibre and people that have a healthy image outside."

After taking the reins of JLP leadership in 1974, Seaga lost the 1976 general election but rebounded in 1980 with a massive win.

Seaga hardly fared better in local government polls as, by the time he retired from active politics in 2005, he had only won two of six local government elections over his 31 years as party leader.

The 39-year-old Holness became leader of the JLP in October last year following the sudden resignation of Bruce Golding.

At the time of Golding's resignation, several persons within the party openly expressed a desire to lead the party. They included Dr Ken Baugh, Audley Shaw, Dr Christopher Tufton, Robert Montague and Holness.

With opinion polls showing Holness' popularity far outstripping his colleagues, the aspirants set aside their ambitions and supported Holness.