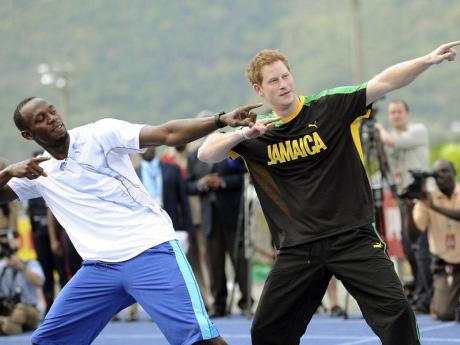 Usain Bolt (left) does his trademark pose with Prince Harry at the University of the West Indies recently. - File

Jamaica's Ministry of Tourism is describing the images of Prince Harry and Usain Bolt splashed across the media worldwide as a major marketing coup with a value of approximately £2 billion.

The ministry figures took only the lone image into account. However, by midday Tuesday, March 6, when Prince Harry's playful antics with the world's fastest man hit the headlines, the story had made it on some 1,800 online publications, reaching approximately 18 million people, said Carole Beckford, Bolt's publicist.

She said the information was coordinated by Bolt's camp locally and media sources internationally.

Mainstream media in the United States, including CBS, NBC and ABC, carried the story, complemented by greater Europe, which takes in the United Kingdom and Germany. Media houses as far as Australia had picked up on the frenzy.

"The extent of the coverage for a 45-minute meeting was phenomenal," said Beckford.

Bolt, who is one of the hottest items globally, had made giant strides in the sponsorship and advertising industry. His Jamaican face is plastered in television campaigns in the UK, and he is representing brands such as Virgin Media and the marketing arm of the Ministry of the Tourism - the Jamaica Tourist Board (JTB).

The incredible impact from Prince Harry's visit seemed to have given the Ministry of Tourism another jolt, as the government body has announced a raft of ideas going forward, hoping to leverage major events to further showcase the destination.

"This (Harry-Usain Bolt phenomenon) has served as the perfect build-up for the highly anticipated London Olympics when billions of viewers across the world will be focused on the sprint capital of the world - Jamaica," Jennifer Griffith, permanent secretary in the tourism ministry, told members of the Jamaica Association of Travel Agents during their annual general meeting at Riu Ocho Rios last Thursday.

Griffith noted that the exposure for Jamaica at the London Olympics would be unprecedented, promising that the country would have a major presence in London and would ensure this opportunity is used to further build brand Jamaica.

Her comments come at a time when experts in the industry such as Beckford continue to call for greater involvement of the JTB in the planning of major events.