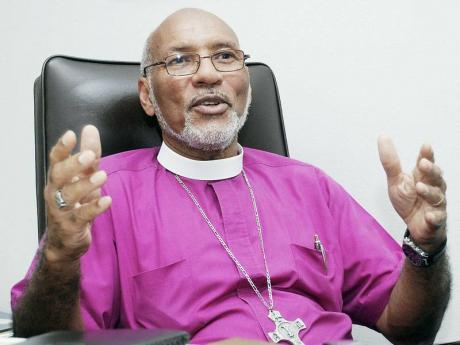 Howard Gregory: I am concerned that those in governance are not doing enough to deal with issues of corruption. - Colin Hamilton/Freelance Photographer

Newly elected Anglican bishop of Jamaica and the Cayman Islands, the Rt Rev Dr Howard Gregory, never had his eyes set on the top position but has gladly accepted the opportunity to serve the people of the diocese.

Gregory has come to the office with a strong agenda in bringing the church forward and addressing some national issues which have been affecting the country's development.

The 61-year-old was chosen as the 14th bishop last week after a day-long deliberation at a special synod held at St Luke's Church Hall, Cross Roads.

Gregory received the two-thirds majority of the votes cast by both the clergy and lay representatives attending the synod on the second ballot.

He told The Gleaner that while his main focus would be to perform the duties of the church he leads, tackling corruption and other critical issues are high on his agenda for the nation's good.

"I am concerned that those in governance are not doing enough to deal with issues of corruption. The contractor general has been making various recommendations of what should happen where persons violate and certain procedures, but those have still not taken place and who are the people violating those procedures?" he argued.

Gregory added: "My main focus will be the church and the church's mission but I don't think the church can exercise its mission with blinkers. We have to recognise the context in which we exist and speak to issues because in the final analysis, many of the persons who are in public life and governance are also part of the church."

He further said that there was a breakdown of trust in society which needs to be addressed and he would not shy away from taking on the challenge.

"What we have seen in terms of voter turnout is indicative of something happening in the society. I believe that is finding its way into the church as well. People are feeling frustrated, they want to see things happening," he said.

"There is a general mistrust of people in authority and leadership and people want to feel that they can trust those who are in leadership so that is one of the issues that I think I need to deal with."

The former president of the United Theological College thinks his counselling ability, his years of experience in theology and a clear understanding of administrative duties have equipped him with the necessary skills to effectively carry out his duties as the leader of the diocese.

Serving 38 years in the priesthood, Gregory's first appointment was that of Anglican chaplain of the Mona campus of the University of the West Indies.

Gregory's move came after a vacancy was created with the retirement of the Rt Rev Alfred Reid on December 31 last year.

Gregory's enthronement as bishop of Jamaica will take place in the Cathedral of St Jago de la Vega, Spanish Town, at a date to be announced.