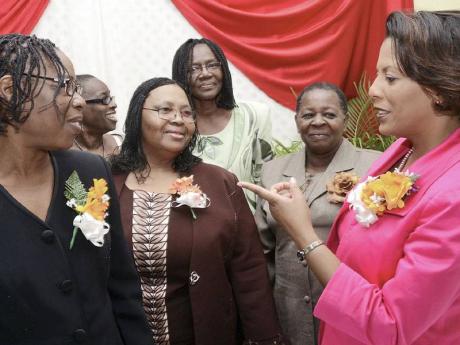 Representatives from the World Bank last week proposed that the Government considers a gradual increase in the age of retirement for workers in the system who are 55 years or younger.

The World Bank also proposed than an average of the last five year of salaries should be used to calculate benefits, instead of the final year.

The two proposals were among several made by a technical team headed by Giorgio Valentini from the Kingston-based office of the organisation last week, during a presentation to the joint select committee of Parliament discussing the Green Paper on Public Sector Pension Reform.

Valentini said the proposals were key components if the reform process is to be successful and it advocated for their inclusion. According to him, once the green paper is adopted and a decision made on implementation, the government should move quickly to implement the institutional capacity to begin the implementation process.

The organisation said the issue was very crucial and it believes that implementing the reform process should begin by 2015, beginning with the increase in retirement age by 2012 also.

Valentini said for those currently in the system, who are younger than 55 years, the process should begin by an increase, year per year (month per month, as national insurance to avoid having to delay retirement in five years). This process should be fully operational by 2030, it said, with a grace period of five years instead of 15 years.

The organisation is proposing a reduction in the rate at which benefits increase for each future year of service for those to be affected by the increase retirement age; maintaining accrued benefits for past service and current pensioners, and the introduction of an "automatic indexation to preserve the value of the pension throughout retirement."

The team said the use of this approach would minimise the impact on employees who are closer to retirement, so that the new rules would increasingly affect younger public-sector employees, with fewer years of service.

Under its proposal, a price indexation should be introduced by 2020, as also a penalty for early retirement by the same year. It said the system should allow workers to choose between this regime, and the one offered to the new entrants.

For the new entrants, a one per cent accrual rate is proposed, base salary being nominal to the final five years; a mandatory five per cent employee contribution to individual account, and an option to make voluntary additional contributions.

According to the head of delegation, the World Bank would offer a package of technical support towards the development of pension-reform proposals with financial resources through a social protection loan.

"The World Bank has fine-tuned an actuarial model that incorporates simulations on the results of several reform options for pension systems costs, finances and level of benefits. This model has been applied in more than 80 countries worldwide, and is currently being used in the case of Jamaica," said the organisation.

The team said the outcome will be a "fully informed" process as was the case in the preparation of the Green Paper.

The World Bank team, which also included the Washington-based social protection specialist Tatyana Bogomolova, and country economist Rohan Longmore, based at the Kingston office, pledged continued close collaboration and ongoing technical support to the Government of Jamaica through to the successful completion of the process.