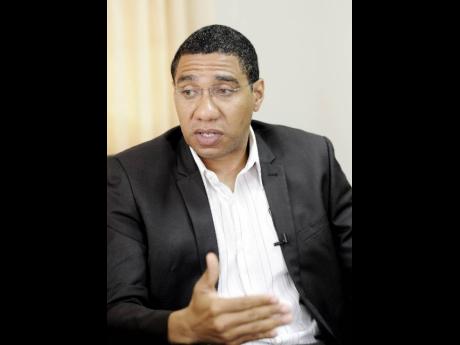 Leader of the Opposition Andrew Holness being interviewed by The Gleaner at His Office last Thursday. - Ricardo Makyn/Staff Photographer

Opposition Leader Andrew Holness, whose party was last Monday defeated in the local Government elections, has come out swinging against the governing People's National Party (PNP) for its approach to governance.

"The Government is playing a delay game. We now hear that the Budget is going to be presented in May. You can't get an IMF (Inter-national Monetary Fund) agreement until probably May or June. JEEP's (the Jamaica Emergency Employment Programme) official launch and structure was delayed until just a week ago when the Government had promised that within two weeks they would have renegotiated the JDIP (Jamaica Development Infrastructure Pro-gramme funds," Holness said.

The comment comes on the heels of Finance Minister Dr Peter Phillips' announcement that the Budget, which is normally tabled in April, will not be laid in Parliament until May. Holness said the move was an indication that the administration is not prepared to confront the tough issues facing the country.

"The Government is really delaying dealing with the tough issues, and I just want to make it absolutely clear that we are a responsible Opposition. We will do whatever is necessary to preserve the best interest of Jamaica and we remain loyal to the people of Jamaica," Holness told The Gleaner.

He has pointed, for example, at the election promise by Simpson Miller to remove general consumption tax (GCT) on electricity, saying failure to deliver on the promise three months after taking power is an indication of dithering.

"The promise that they would remove the GCT from electricity is another (example of the) delay. You won't hear about that until the Budget, and the Budget is in May," Holness said.

Simpson Miller, during the general election campaign, had promised to remove GCT from electricity bills. However, since taking power, the PNP said the proposal will be included in the package of comprehensive tax reform.

"The delay tactic that this Government is undertaking is only going to make our problems worse," Holness said.