The making of a city 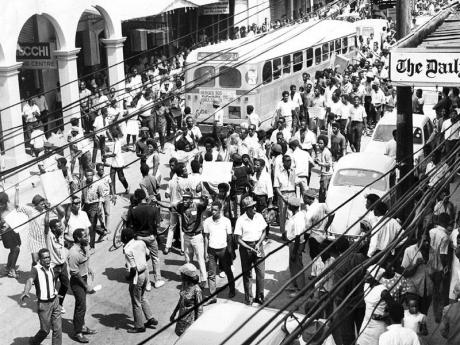 A section of the large crowd which gathered in front of the Gleaner building in one of several protest meetings throughout the city in the 1960s. 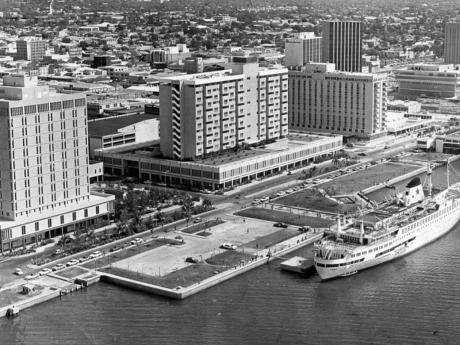 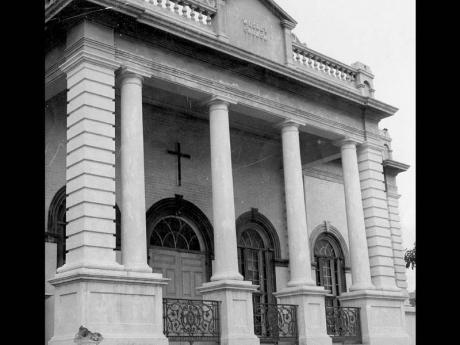 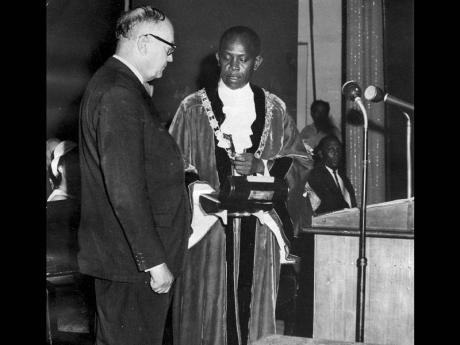 The city of Kingston traces its roots to the informal settlements established by survivors of the 1692 earthquake which devastated the town of Port Royal, across the harbour.

Port Royal, then one of the Caribbean's four principal ports, had a population of some 8,000 people in 1688. When the earthquake struck four years later, two-thirds of the harbour and shoreline sank and some 3,000 inhabitants and visitors died. The survivors fled across the harbour, where more died of exposure and disease. The area which became known as Kingston, was originally the lower part of Liguanea in St Andrew and the property of Sir William Beeston. It was sparsely populated, with a small collection of houses. In fact, it was not more than a village. Cundall quotes from the Present State of Jamaica, published in 1683, as giving the following description of the village:

At Liguanea, the inside of the harbour, opposite the Port Royal, about two leagues, is several homes, some of them very handsome, and well built, which place in time is like to become a pretty town.

By the end of 1692, plans for the new town were drawn up. The design was initially attributed to Christian Lilly, engineer, but evidence in the Council of Jamaica Minutes indicates that the scheme was done by John Goffe, a surveyor, and submitted to the Jamaica Assembly for approval. Having identified the land and gained the approval of the Assembly, some 200 acres of land were purchased from Colonel William Beeston, an absentee proprietor, for £1,000.

The original owner of the land was Colonel Barry, who patented it in 1664 and later sold it to Colonel Beeston, who was later to become lieutenant governor of the island.

Goffe's plan for Kingston was a grid system of regularly spaced streets and lanes intersecting at right angles. The entire town was one mile from the harbour on the south to its northern edge of North Street and half-mile in breadth from East Street to West Street. The major streets - King and Queen streets - were 66 feet wide and ran north to south, and east to west, respectively.

At the intersection of King and Queen streets was a Great Parade Ground, military barracks and church. These two streets had the effect of dividing the town into four great quadrants of equal size.

The deposits of mud and debris to the south of Harbour Street created new lands for the expansion of the town. This land, which came under the control of Beeston, was subdivided and sold or rented as lots to merchants and warehouse keepers.

In 1713, Beeston's heirs claimed the shoal water and attempted to deny the citizens free access to the harbour. This was disallowed by the Crown, and construction of buildings continued on what later became known as Port Royal Street.

Unlike the early baroque cities after which Kingston was patterned, the early plan of the town provided the basis for settlement and accommodation for the commercial economy of the port. In the early years, the population consisted of merchants centered in the southern end of the town.

In baroque cities, the centre, which is usually public and commercial, is the largest and most important section and the poorest residential sections are forced to the edge of the city.

In 1703, a fire destroyed Port Royal, which had continued to operate as a port, confirming Kingston as the commercial capital of Jamaica. Refugees fled Port Royal and came to settle in Kingston. The Assembly directed that lots were to be divided and given to those who had lost their houses. In addition, a seven-year tax-free incentive was instituted for the construction of permanent houses, in an attempt to encourage settlement. Shortly thereafter, a law was passed declaring Kingston to be the chief seat of trade and port of entry.

The receiver general, the island secretary and the naval agent and their deputies were compelled to transfer their offices from Port Royal to Kingston. The prosperity of the new town was now assured. By 1713, it was declared by law:

That the place [Kingston] should forever be taken to be a distinct parish with all the powers of any other parish and "have the right of sending three representatives to the Assembly".

With the passage of this law and the growth of the town's economy, Kingston was well placed to become the major commercial and administrative centre of the island.