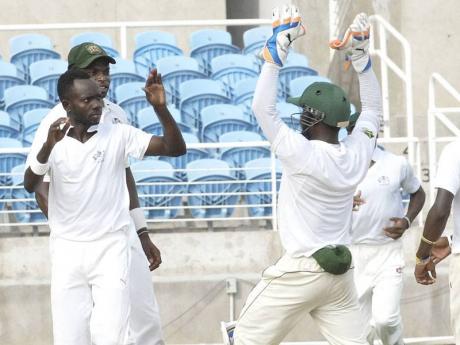 Jamaica's left-arm spinner Nikita Miller (left) celebrates with his teammate Horace Miller after taking one of his four wickets on the third day of the Regional Four-day semi-final match against Guyana at Sabina Park yesterday. Jamaica defeated Guyana by 133 runs. - Ian Allen/Photographer

The 29-year-old Miller, a left-arm spinner, who is trying to force himself back into the West Indies team, after a spell on the sidelines, bowled superbly to claim four for 28, as Guyana, chasing a victory target of 260, crumbled to 126 all out.

Miller, who was named Man of the Match, finished with match figures of seven for 44. Leg-spinner Brown picked up three for 42 while pacer Andrew Richardson bagged two for 21.

Jamaica's captain Tamar Lambert was delighted with his team's performance.

"I am very happy because I think we have played three days of good cricket. We bowled and fielded well," said Lambert. "However, we didn't bat well in both innings but our bowlers always seem to get the job done and so this was a total team effort from us," Lambert added.

Resuming the day at 99 for three, with opener Xavier Marshall on 54 not out and Lambert on one, respectively, Jamaicans took the score to 115 before the former was caught behind by wicketkeeper Derwin Christian off the bowling of Narsingh Deonarine for a well-layed 59.

This signalled the start of a collapse for Jamaica's batsmen as apart from Lambert 37, David Bernard Jr 16, and Sheldon Cotterrell 12, the batting fell away.

Devendra Bishoo 5-62 and Veerasammy Permaul 3-51 were the main destroyers for the Guyanese.

Chasing 260 to win, the Guyanese began disastrously as opener Trevon Griffith was brilliantly caught at extra cover by Jermaine Blackwood off the bowling of pacer Cotterrell for seven. Two overs later, Leon Johnson was caught in the slips off the bowling of Richardson, as Guyana struggled to 20 for two.

Richardson picked up his second wicket of the innings when he had Chanderpaul Hemraj caught at second slip by Brenton Parchment as Guyana reached 44 for three at tea. Deonarine 23 and Assad Fudadin 24 shared in a 30-run fourth-wicket partnership before the former was adjudged leg before wicket off the bowling of Brown.

Guyana's captain Shivnarine Chanderpaul followed Deonarine back to the pavilion when he was also trapped leg before by Miller for four. Fudadin innings came to an end when he was caught behind by wicketkeeper Horace Miller off the bowling of Brown. Brandon was the last Guyanese batsman out, caught at silly point off the bowling of Miller. Christian was left not out on 20.

The Jamaicans will face Barbados in the final.