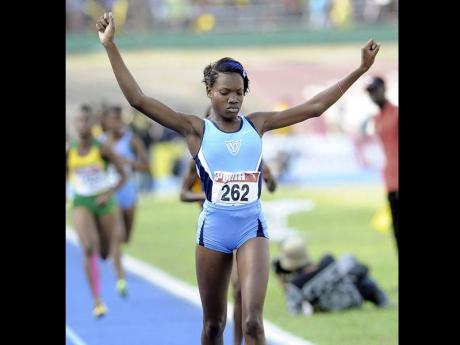 Marleena Eubanks, one of the stars for Edwin Allen High at the 2012 ISSA/GraceKennedy Boys and Girls' Championships, celebrating her victory in the Class-Two 800 metres final at the National Stadium last Saturday. Eubanks clocked 2:10.44. The win completed a middle distance double for the 17-year-old athlete who won the Class-Two 1500 metres on Friday evening. - Ricardo Makyn/photographer 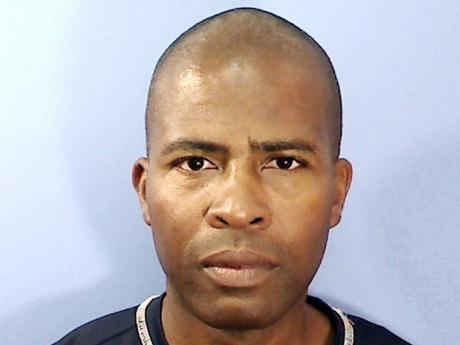 Having waited over 20 years to get his first hold on the coveted girls' championships trophy, Edwin Allen High's coach Michael Dyke does not plan to relinquish his grip anytime soon. Dyke sounded a strong warning to all prospective challengers that having waited so long to get their hands on the girls' crown, they intend to reign for a decade.

It's an achievement they prevented Holmwood from accomplishing when they dethroned the nine-time champions at the 2012 staging of the Inter-Secondary Schools Sports Association (ISSA)/GraceKennedy Boys and Girls' Athletics Championships held over last weekend at the National Stadium.

"They will have to come very strong many years after this in order to relieve us of this cham-pionships because we will be setting our base for another 10 years," Dyke told The Gleaner after wrapping up the title on Saturday's final day.

"Our plan was to outscore Holmwood because when you are beating a defending champion, you will not get away with any close calls. So we ensured that we beat them as far as possible and I think they got a sound thrashing," he added.

The Frankfield, Clarendon-based school tallied 365 points to crown themselves queens of Jamaica's high school track and field for the first time in their 48 years' existence. Holmwood tallied 234 points.

'This is our moment'

"I am very happy ... because we have been working at it for over 20 years," Dyke shared. "We have put in serious challenges for the championship over the past five years and within that time we have gone very close, but I am a strong believer that nothing will happen before the right time and this is our moment," he added.

Dyke, who is also a past student of Edwin Allen, stressed how significant the school's triumph is to the general community.

"It is very special because we are from a farming community which has not had much success," Dyke informed. "Apart from the school winning netball championships, we have not won anything significant in sports. The school, the community and all the persons who are behind this to make it a success, I must say thanks and I am very happy for them," he added.

Edwin Allen came very close to winning the championship in the previous two years, but faltered due to misfortune and at times bad tactics. They, however, made no mistakes this time around, as they executed a flawless performance to lead from start to finish.

"Experience and all-round strength in all classes is what helped to carry us through," Dyke outlined. "We had a much better plan this time around and we looked at all the little things that we have overlooked in previous years," he added.

According to Dyke, he will be losing a mere "three to four percent" of his athletes. Those going include Danniel Thomas who stuck gold in the shot put open and javelin open, as well as bronze in the discus throw Class One. Also departing is 2000m steeplechase winner and 1500m Class-One bronze medallist Desreen Montaque and Shawnette Lewin who took silver in the Class-One 200m and bronze in the 100m.

"Our base is already there for the next championship," Dyke assured. "A number of the girls will be repeating in Class Four and we already have girls in line to replace those who are leaving ... so the team will be even stronger for next year," he further asserted.