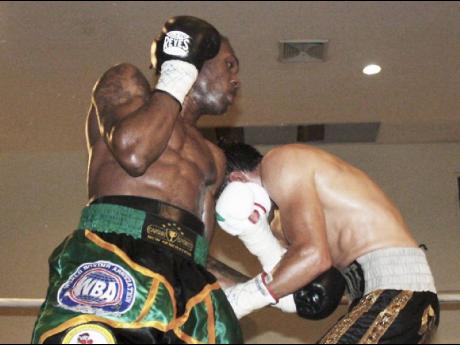 Jamaica's Nicholas Walters (left) scoring with a left to the body of Mexico's Hector Javier Marquez during their featherweight fight in Colón, Panama, last Saturday night. Walters earned a unanimous decision victory over the Mexican. - Contributed

"Although I won every round, this was one of my toughest fights and I now know how rugged these Mexican boxers are."

So said Nicholas 'Axe Man' Walters in an interview with The Gleaner yesterday following his unanimous decision victory over Mexican Hector Javier Marquez, in Colón city, Panama, on Saturday night. His record is now 20-0 with 16 knockouts.

Walters, who is the World Boxing Association (WBA) Fedelatin featherweight champion and is now rated No. 2 in the world in his weight class, fought Marquez in the co-feature on the fight card in Panama. Reports are that Walters dominated the fight from the opening bell and had his opponent in trouble in both the fifth and 10th rounds.

Walters volunteered that his opponent was so badly beaten up in the ninth round that he did not believe the fight would go into round 10. "The Mexicans are tough and never give up and he wanted to continue to the end" said Walters. He also said he believed that his opponent had suffered a broken nose as he was bleeding a lot.

Jacques Deschamps who manages Walters said he was pleased with the performance of his fighter. "This was an important victory for Nicholas" he said. Marquez, who is 38 years old and has a record of 30-23 with 21 knockouts had been selected for Walters because of his capabilities.

"He has fought seven world champions and beaten three of them, so we know that he is good. We wanted Nicholas to get some first-class opposition and he did." Looking towards the future he said "we still have a world title fight in mind for later this year and this is another positive step in that direction."