100 years of Calabar at Champs 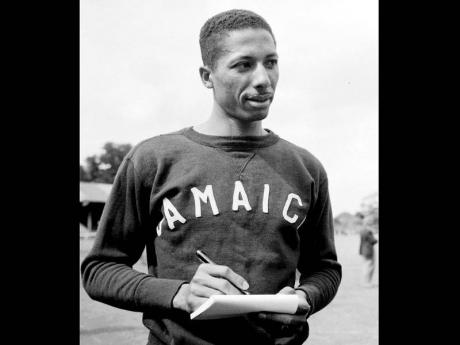 That entry year in 1913 saw Calabar joining Jamaica College, St George's College and Wolmer's Boys as one of the four competing schools in the inter-school sports competition. It's small team was selected from a school enrolment of just 40 boys, none of whom was old enough to compete in Class One. It was an entry with impact.

By 1916, Calabar were doing better, moving up to third place ahead of St George's. Guy Graham, now in Class Two, won the 100, 220 yards and the high jump to become the Class Two champion. The following year, Graham in his first year in Class One, again wrote his name in the record books as he won the high jump, pole vault, long jump, throwing the cricket ball, and came second in the 100 and 220 yards to score 16 points for the Class I championship.

With support from the likes of Frank Gordon-Somers in Class One, Sydney Laing in Class Two and Frank Laing, who emerged the champion sprinter in Class Three with his teammate Burchell Phillips coming third in both sprints, Calabar moved up to second place.

Guy Graham left school having staked his claim as one of the finest schoolboy athletes of all time and after 100 years of schoolboy championships, he is still one of two boys to have won the individual championship in all three classes, with his finest hour coming in 1917 when he broke the pole vault record with a height of 10'3". He had cleared 10' to win the competition, "and when asked to give an exhibition, he cleared 10' 3" with apparently less effort - winning the unstinted applause of all the boys".

In 1919, Stanley Laing emerged the Class Two champion athlete and went on to become the second Calabar boy to win the Class One championship in his first year. He repeated this feat in 1921 and 1922 to equal the record of the famed Norman Manley of JC. Laing won nine events, came second in three and third in two and remains the only athlete in the history of Champs to score points in seven events in one championship.

Another Calabar boy, Frank Arthur Leslie Laing, became Class One champion in 1924, winning the Class One high jump, long jump and the open 120 yards hurdles in a record time of 16.6 seconds. That year, Alfred Carnegie, who after two years at school was still young enough to compete as a first-year Class Three boy, came second in both the 100 and 220 yards. The following year, he won both events. In 1928, Carnegie went on to become Class Two champion, and with the support of H.A. McMorris and Egerton Richardson scored points for Calabar in every Class Two event except the high jump.

With G.C. Foster and Frank Laing at the helm, Calabar would emerge victors for four consecutive years. The first win came in 1930 thanks to an outstanding performance by Herman McMorris, who gained 14 points to win the Class One champion. Gladstone Mills, the outstanding educator and public servant, recalls that the entire community of Chapelton, McMorris' home town, shared in the triumph of their local hero when the news reached that he had led Calabar to their first boys' athletic championship title.

In 1931 McMorris was even more devastating, winning the 100, 220, 440 and the long jump as he amassed 16 points (Note: It was four points for a win then. Today it's nine). Only Norman Manley who gained 18 points in 1912 had done better, and in the history of Champs only two other Class One athletes had amassed 16 points in a single championship. Both were Calabar boys - Stanley Laing in 1922 and Guy Graham in 1917.

In 1931, McMorris got good support from his teammate Noel Ainsworth, who emerged Class Two champion.

The third consecutive victory in 1932 was a team effort with 11 athletes contributing the 30 points for victory. The star performer, however, was 10-year-old Arthur Stanley Wint, who won both the Class Three sprints. Wint was the son of the Presbyterian minister, Reverend John Samuel Wint and his wife, Hilda. From his first year in school his bearing and manner were those of a young man destined for greatness and he did achieve greatness.

In 1933, for the fourth consecutive year, the Cup came to Studley Park Road as Arthur Wint repeated his Class Three victories, and I. Abrahams dominated Class Two.

End of the golden run

The school's 'golden run' in schoolboy athletics came to an end in 1934 when the headmaster decided that Calabar had held the Cup long enough, and that another school's success would better serve the interest of the competition and encourage a sense of sportsmanship among the participants.

That year, although Wint was young enough to run in Class Three for the third time, the headmaster instructed him to "stand back" and give another competitor the opportunity to win. Calabar dropped to fifth place in the competition.

In 1935, Henry Malcolm McDonald Messam, the 'Midnight Express', led the school's resurgence in the Inter-Schools Athletic Championships by winning the 100 and 220 yards which helped Calabar to second place. An interesting winner in the 880 yards was another Calabar boy, T.K. Wint, who went on to achieve national stature as a weight trainer and physical fitness 'guru' for Jamaican athletes.

By 1936, Calabar were again victorious. Messam's captaincy of the team was a decisive factor as every member contributed points to the school's victory. Phoebe, the eldest of the three Robinson boys who all attended Calabar, won the Class Two long jump. His two younger brothers, Leslie and Rudolph, would add five long jump titles to the family collection.

Among the new boys entering Calabar in 1938 was 15-year-old Herbert Henry McKenley. That year he hardly made an impact at the Inter-Schools Championships with only a second place in the Class Two 220-yards to his credit. The outstanding performer for the school was L.B. Jones, who beat Herb in the 220-yards and went on to emerge Class Two champion.

Although 1939 was not a good one for Calabar at Champs, Herb McKenley, running in Class One was the school's most successful performer coming second in the 440 and third in the 220 yards. The following year, the epic rivalry between himself and Leroy 'Coco' Brown of Wolmer's began in earnest.

Both athletes would run five races over the two year period and Herb would defeat 'Coco' Brown only once in the 440 yards, only to have his record disallowed after the track was found to be a few feet short. What he left the school with was the capacity to wrestle with "things impossible" and a yearning to achieve the highest goal by the utmost effort. In 1943, Herb became the first Jamaican athlete to win a track scholarship to a college in the United States and three years later he was ranked number one in the world in the 400m.

In 1946, the Championship Cup returned to Studley Park Road (the home of Calabar - the school moved to Red Hills Road in 1952). That year (1946), Ruddy Robinson in Class Two and Horace Russell in Class One were the heroes.

Horace still remembers 'Old King D's exhortation to the team: "Calabar expects every boy to do his duty".

The team certainly got the message. Amador Gilman, the head boy, in an inspired throw beat the favourite Ken Hamilton of JC. Watts, the captain of the team, ran the race of his life to come second in the 200 yards ahead of the 100 winner Ron Alberga.

In Class Two, Ruddy Robinson won the 220 yards and the long jump, placed second in the 100 yards and anchored the sprint relay to victory en route to becoming the champion of his class. Despite these performances, with one event to go, the open mile, Calabar were three points behind Jamaica College. Only a win could take them to victory, and the Championship Cup would be decided by Calabar's lone representative in that race, Horace Russell. He was more than equal to the challenge.

When the pistol went off for the start of the race, Horace took the lead and never looked back. His coach, Barrington 'Flying Farmer' Grant, had represented Jamaica in middle-distance running and had coached him well. He hit the tape in 5 minutes 3.6 seconds, just missing the record. Pandemonium reigned as Calabar won Champs by one point.

In this centenary year of the school and its 100th Champs, glory again beckons as with its established tradition in track and field athletics Calabar would once again attract national and international recognition by doing its utmost for the highest.