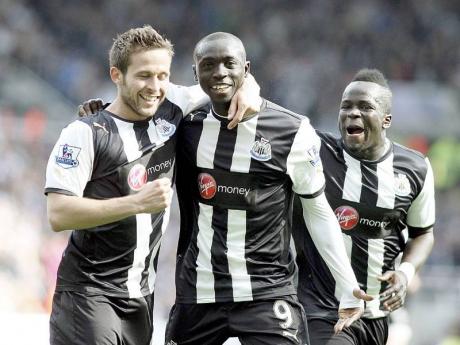 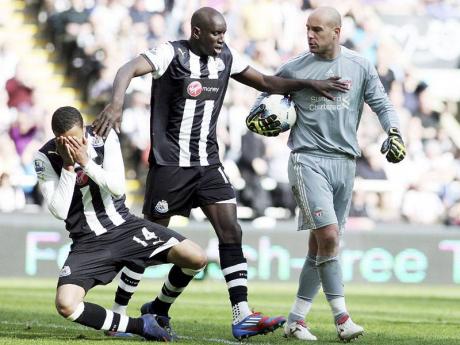 The Senegal striker kept up his stunning form since joining Newcastle from German side Freiburg in January, taking his tally to seven goals from seven games with well-taken strikes in the 19th and 59th minutes at St James' Park.

The win kept Newcastle level on points with fifth-place Chelsea and reduced the gap to third-place Arsenal to five points with seven matches remaining, a situation which appeared highly improbable at the start of the season after losing Jose Enrique, Joey Barton and captain Kevin Nolan in the summer.

"If someone said, 'You are going to be in the Europa League,' I would snap their hands off," Newcastle manager Alan Pardew said.

To add to Liverpool's misery, the visitors had goalkeeper Jose Reina dismissed late on for appearing to headbutt Newcastle defender James Perch. The Spain international will now miss the next three games - including the FA Cup semi-final against Merseyside rival Everton at Wembley Stadium on April 14.

The fallen giants of English football have lost six of their last seven matches to slip to eighth place in the standings, behind Merseyside rival Everton, to pile more pressure on manager Kenny Dalglish.

"The boys have shown frustration and that's probably why Pepe Reina was sent off. It was the frustration of being behind," Dalglish said.

The home fans derided Dalglish at the end of the match, singing "You're getting sacked in the morning," and the Scottish manager wasn't the only person to be roundly jeered by Newcastle's notoriously vocal fans.

Andy Carroll, who moved to Liverpool from Newcastle for a club-record fee of 35 million pounds (then $56 million) in January last year, was booed throughout by the home supporters with those jeers intensifying when he was booked for diving after rounding goalkeeper Tim Krul in the 19th minute with the goal at his mercy.

"He said he never went down, he stumbled over. It wasn't a penalty," Dalglish said. "We don't have any disagreement with Andy going down and with the Pepe Reina decision either."

While the England striker's poor goalscoring run continued, the same cannot be said of the man who replaced him as No. 9 at the northeast club.

Cisse couldn't have made a better start to life on Tyneside and he endeared himself even more to the supporters by heading home a cross from Hatem Ben Arfa at the far post to put Newcastle ahead.

Mike Williamson struck a shot against the post in the 47th for the hosts before Cisse grabbed his second, collecting a pass from international teammate Demba Ba before rounding Reina and stroking home from six metres.

Cisse should have been flagged offside for that goal, increasing Liverpool's frustrations which boiled over in the 81st when Reina was given a straight red card.

The goalkeeper reacted badly after being clipped by Perch's outstretched leg after making a routine save, turning round and aiming a headbutt at the centre back, who fell to the ground theatrically.

"He's done something you can't do as a professional footballer. He put his head in one of our player's faces," Pardew said.

With all Liverpool's substitutions having been made, left back Enrique ended up in goal for the final 10 minutes.

Aston Villa were beaten just 24 hours after it had been announced that captain Stiliyan Petrov had been diagnosed with acute leukaemia. Daniel Sturridge gave Chelsea an early lead before Branislav Ivanovic added a second after the break. A hectic few minutes saw Villa's James Collins pull one back before Eric Lichaj levelled. But just a minute

Everton scored a goal in each half to climb above Merseyside rivals Liverpool in the Barclays Premier League table. Leon Osman's wayward 20-yard shot, after a slick one-two with Nikica Jelavic, deflected off Albion's Gareth McAuley past a stranded Ben Foster. And Victor Anichebe's low strike capped a great week for FA Cup semi-finalists Everton, who move up to seventh place.

Fulham scored their first goals in four games to halt a run of three successive defeats. Clint Dempsey touched the ball home after John Ruddy was unable to hold Bryan Ruiz's shot for their first goal. And Fulham were two up as Dempsey set Damien Duff free with the winger curling the ball beyond John Ruddy in the Norwich goal. Fulham twice hit the woodwork but Aaron Wilbraham's deflected shot set up a tense finish for the home team.

Manchester City staged a dramatic late comeback to keep their title bid alive, after falling 3-1 down at Etihad Stadium. Sebastian Larsson put Sunderland ahead before Mario Balotelli equalised from the spot after Edin Dzeko was fouled. The visitors restored their lead via Nicklas Bendtner's header and extended it when Larsson met Bendtner's cross. But Balotelli fired in and Aleksandar Kolarov drilled home to level, although City lost their 100 per cent home record.

Queens Park Rangers claimed a valuable victory in their battle against relegation thanks to Samba Diakite's first goal for the club. Adel Taarabt scored the opener but the hosts were soon pegged back. Theo Walcott found space in the box and sidefooted into an open net after his initial effort came back off the post. Rangers goalkeeper Paddy Kenny denied Robin van Persie one-on-one after the break before Diakite blasted in Jamie Mackie's pass to end the Gunners' hopes of winning for the eighth successive game in the Barclays Premier League.

Wigan remain in the bottom three but moved level on points with Blackburn in 17th place following this victory. Antolin Alcaraz's second-half header gave Wigan the lead before Victor Moses sealed victory with a late goal. Ryan Shawcross had Stoke's best chance with Ali Al Habsi saving his header. Jean Beausejour and Franco Di Santo wasted great chances for Wigan before Moses struck to help give the Latics a real chance of survival.

Wolves are six points adrift at the bottom of the Barclays Premier League after an impressive comeback win at Molineux. Wolves led through Michael Kightly's goal but the game turned on a penalty when referee Jonathan Moss ruled Mark Davies had been fouled by Wolves captain Roger Johnson. Martin Petrov equalised from the spot and Bolton took advantage to add further late goals through Marcos Alonso and substitute Kevin Davies. Matt Jarvis' reply was too late to save Wolves.

Two goals by Papiss Cisse maintained Newcastle's pursuit of a European place as they extended 10-man Liverpool's recent Premier League misery. Cisse headed in Hatem Ben Arfa's cross in the first half before tapping in from Demba Ba's centre after the break. It was a poor afternoon for the visitors, who had Andy Carroll booked for diving against his former club, and it was made worse when goalkeeper Pepe Reina was sent off.