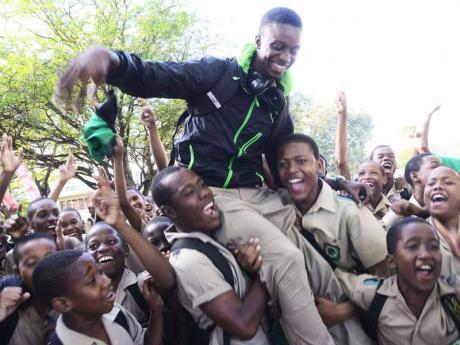 Calabar team captain Damar Robinson is lifted in the air by jubilant schoolmates during yesterday's celebration of the school's win in the ISSA/GraceKennedy Boys and Girls' Athletics Championships at their Red Hills Road, St Andrew, compound. - Rudolph Brown/Photographer

FIRST IT was rugby, then School's Challenge Quiz and now Boys' Championships.

And the effervescent Calabar boys are in no mood to settle for those achievements alone. They want more.

"Today, there are several persons who are jumping up now but a few days ago, they were not showing us any respect," school board chairman the Reverend Karl Johnson told a partisan group of boys at the school yesterday.

He added: "But we kept our faith, we believed in ourselves and when the dust was settled, it was only one name on their lips, and that name was Calabar."

Even teachers clothed themselves in the green and black, and a few students brandished their 'rats'.

Amid the excitement, one man joked about the misfortune of the school having to be closed a few weeks ago due to the infestation of rats.

"If you turn rats backways you get star," the man said.

But it was not just teachers and students who were celebrating. Sean Harvey, a blind Calabar old boy who turned up at the school to celebrate the victories, said it fittingly reflects 100 years of euphoria.

"Great would be an understatement because it is the most befitting achievement that we could have gotten," Harvey told The Gleaner.

He said he expected the momentum to continue.

"The year is not finished... . We have the Manning Cup starting September," Harvey said.

The moment was not lost on the school's chaplain, Horace Cunningham.

"The fact that we are celebrating 100 years makes the occasion even more special," he said, desperately trying to keep his voice above those of the ecstatic bunch of boys.

Johnson, in the meantime, has put the school on notice for greater things.

"I want to let you know that this is just the beginning because already we are targeting some coveted accolades and prizes, not just in sports but also in academia. We are already zooming in on Calabar boys who we can encourage to apply for major scholarships in the field of academia," Johnson said.

"What we are doing is drawing a line, we are raising the bar this year and we are saying that Calabar will continue, and increasingly so, be the place of choice to send young boys in this country, right here at 61 Red Hills Road," he added.