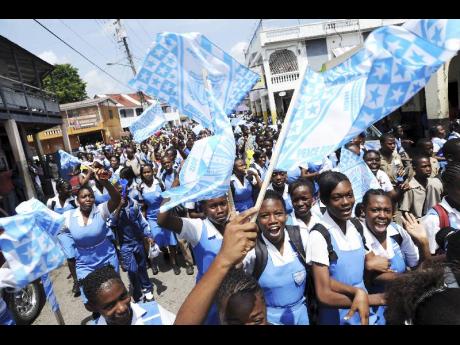 Edwin Allen students and residents of Frankfield, Clarendon, participate in the school's parade through the town in celebration of its girls' champs win yesterday. - Ricardo Makyn/Staff Photographer

Jubilation was the order of the day in Frankfield, Clarendon, yesterday as Edwin Allen High School celebrated its historic weekend victory at the Inter-Secondary Schools Sports Association/GraceKennedy Boys and Girls' Athletics Championships.

When The Gleaner arrived on campus about 8:05 a.m. hundreds of students had flooded the school compound, blowing vuvuzelas and chanting "Edwin, Edwin, Edwin".

On show and drawing a lot of attention inside the quadrangle was a tiny makeshift coffin painted maroon and white with a doll inside depicting the burial of Holmwood.

The schoolyard was packed as, along with the students and teachers, there was a large turnout of members of the community. In addition, almost every vehicle that came in the vicinity of the school carried blue-and-white flags.

When Dyke arrived he was hoisted in the air by four female staff members who brought him to the platform where the principal, Everton Walters, and other members of staff were waiting.

Soon after, as Walters addressed the school, Dyke and his assistant Marlon Gayle left and returned with the team, including captain Sasha Gaye Marston who held the championship trophy in her hands.

The other members of the team, all decked out in their white T-shirts and blue-and-white track bottoms, marched into the schoolyard as the noise level went up another notch.

When things settled, Walters thanked both the girls and coaching staff for a job well done.

"You have all made the community proud of this historic achievement as this has been coming for years and you have all worked extremely hard and what a way to celebrate," he said.

"We will be putting things in place to better equip the dormitories and we will also be doing everything to improve our playfield," he added.

Richard Azan, the member of parliament for North West Clarendon, where the school is located, was on hand to congratulate the team.

"I will do my best to do whatever I can to ensure that the school continues its success," said Azan, who also donated a cheque for $80,000 to the principal to assist with the school's celebrations.

This was in addition to $160,000 which was donated a few days before the team went to the championships.

Dyke also thanked the entire school population for its support.

"I am a happy man today as we were always confident of winning and, after coming so close twice, the girls have made the school community proud," he said. "I would like to say thanks first to the girls for their fine achievement, to the principal and staff, including the ancillary staff, the dorm mother, the parents, the community and to the bus driver who is always on time."

Dyke also declared that Edwin Allen would win girls' champs for another 10 years as his team was a young one.

An excited Marston said: "I would like to big up the coaching staff and all the members of the school community who were involved in this success."

It was then time for all to march through the town of Frankfield as students were joined by other community members who beat drums and blew whistles as they marched through the town. After that, the team members along with the principal, coaches and other members of staff were transported to the town of Spaldings where they continued their celebration.