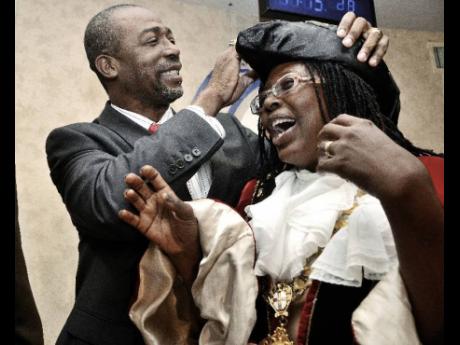 As her first order of business, newly elected mayor of Kingston, Angela Brown-Burke says she would be working with the relevant agencies to undertake an intensive clean up campaign in the municipality, as well as implement a permanent solution to the problem of rodent infestation.

Speaking yesterday during her swearing-in ceremony at the Kingston and St Andrew Corporation's (KSAC) downtown office, among the other critical areas she outlined that would be given top priority were fixing of roads, creating suitable, viable and appropriate vending areas, as well as security measures that would demonstrate humanity to all.

Encouraging companies to continue to be part of the rebirth of downtown Kingston, she also pledged to maintain local economic development, provide a welcoming environment, transparency in governance and quality of service.

While paying tribute to former mayors and their legacies, the People's National Party (PNP) councillor emphasised that she could not and would not betray the mandate of the electorate.

Brown-Burke commended the PNP Government for its step in giving local government a voice in the Cabinet and beginning the process of entrenching it in the Constitution.

She asked Minister of Local Government and Community Development Noel Arscott, however, to urge the Cabinet to place at the top of the legislative agenda the laws that would make the council autonomous, giving a critical voice and space to the communities they represent.

"We cannot wait too much longer for laws that will deepen and strengthen representative democracy, while allowing citizens to play an active role in managing issues that affect their daily lives. We cannot wait much longer for laws that give us a platform for good governance, sustained development and good order within our jurisdiction," she noted.

Outlining the style of governance she intended to undertake and promising an all-inclusive term in office, working with all 39 councillors, Brown-Burke told the gathering: "It is not only about what we do, but it is also about how we do it. I'm therefore committed to an open, transparent, responsive and efficient system of governance."

She added: "I therefore pledge to ensure efficiency and effectiveness in the management of the business of the council; integrity and accountability by all and I intend to lead by example. I also pledge to ensure that transparency is not just a concept but that it is a lived reality."

Brown-Burke, who first became a PNP councillor in 1998 for the Norman Gardens division, is now the fourth female mayor of Kingston. She told The Gleaner she was "excited, awed and humbled" by the new step in her political career.

Desmond McKenzie, opposition spokesperson on local government, who also served as KSAC mayor for more than eight years, Town Clerk Errol Greene and Arscott pledged their full support to the continued work of the council.