We should all embrace the rat spirit 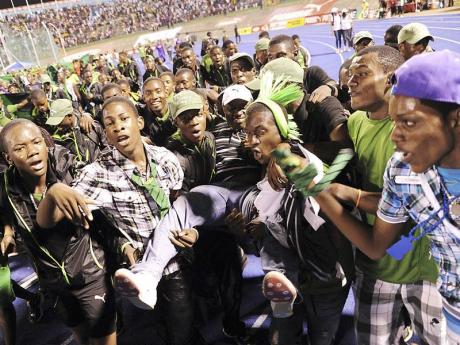 Calabar head coach Michael Clarke is carried by athletes around the stadium track after the school's victory on the final day of the ISSA GraceKennedy Boys and Girls' Championships at the National Stadium last Saturday. - Ricardo Makyn/Staff Photographer

IT WAS all over the print and electronic media: Calabar infested by rats and closed for three days. The news released a barrage of comments, insinuations, jeers and insults about rats. All this came back to mind as I sat and listened to the Calabar coach speak about embracing their misfortune of being 'rat-ified' and using it as a means of motivation to spur them on to achieve 'The Utmost for the Highest' not only at School Challenge Quiz, but also the Inter-Secondary Schools Sports Association/GraceKennedy Boys and Girls' Athletics Championships.

They could have taken it to heart and let it defeat them, but they embraced the spirit of the rat and profited by it. Rats are nothing else if not opportunistic survivors. Of all the animals, rats are seen as the most likely to survive almost any situation.

In Western culture, the rat is reviled by many as a destructive, ruthless, and nasty parasitic animal that steals food and spreads disease; while in the East, the rat is revered for its quick wit, intelligence, ability to learn and to accrue and hold on to items of value. Rats are considered a symbol of good luck and wealth in both China and Japan.

The sons of 'RABALAC' had good luck not because of the rats, but because they trained hard and execute with precision the strategies put in place. It's a lesson that should not be lost on the rest of the Jamaican society. Despite the difficulties, hardships, naysayers, and dream killers, we must as a people stop complaining, stop pointing fingers and stop looking for 'blyes' and embrace the spirit of the rat. Let's use our circumstances to benefit all of us so that we too can achieve the utmost for the highest.