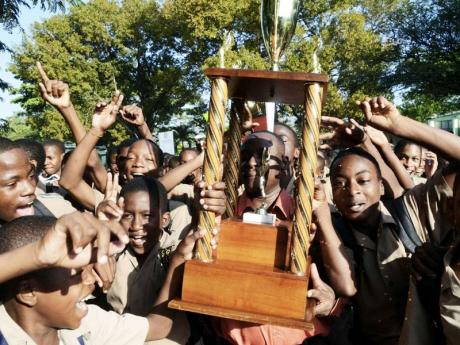 Students and teachers, some of whom are holding the trophy, celebrate their Boys' Champs victory at Calabar High School yesterday morning. - Rudolph Brown/Photographer

Building technology teacher, Davis Myers pulled up in an old Suzuki Swift, green siren affixed and Calabar paraphernalia hanging from all sides; music from a pair of loudspeakers charged the gathering mass of teachers, past students and students to "Hold on pon yuh victory".

The popular Estiban Lindsay gospel anthem, doubled as a celebratory chorus, with 61 Red Hills Road being transformed into 'party central', as Calabar celebrated not only their 22nd Inter-Secondary Schools Sports Association (ISSA)/GraceKennedy Boys and Girls' Athletics Championships title, but also wins in the Schools' Challenge Quiz and the Surrey County Under-16 Rugby League. It has been a pretty good month for the school that is this year celebrating its 100th year of existence.

Excited students gathered outside the auditorium from as early as 7 a.m. yesterday, many beating drums and blowing on vuvuzela-type horns, and like children enchanted by the pied piper, the masses moved in unison to the school's auditorium, led by several teachers bearing the school's most recent trophies.

Tenth-grader Kashaine Brackenridge was particularly creative, grabbing a lot of attention with his self-designed vest that had a muscled and militant-looking rat sewn in on the back - a clear and comical jab at the recent rodent issues at the institution.

"I designed it at my aunt's house to show that although that incident was negative, we didn't dwell on it, we turned it into something positive," said an animated Brackenridge.

That was the popular sentiment throughout the celebrations, which got under way proper, with a lively praise-and-worship session, which was led by the school's guidance counsellor Reverend Stephen Smith.

"Today, there are several persons who are jumping up now, but a few days ago they were not showing us any respect. But we kept our faith, we believed in ourselves and, when the dust was settled, it was only one name on their lips, and that name was Calabar," Johnson added to earth-shaking approval from the several hundred boys that had gathered.

Principal, Major Lincoln Thaxter, believes that there is a greater message in his school's triumph.

"It (the Champs win) really is a great continuation of all the good things that have been happening in this our centenary," said Thaxter. "What it has taught us and the country at large is that, even amid difficulties and challenges, if we do not get distracted and remain focused on the goal, we will triumph over seemingly insurmountable obstacles."

Turning his attention to the Schools Challenge Quiz victory, Thaxter, a Titchfied High School past student, admitted that Thursday night's Calabar victory over his alma mater was a strange experience.

"It was a bittersweet moment for me; I am at Calabar, I am the principal, so it as always has my full support. It was a good competition between the schools, and I was happy to have contributed to the development of both great institutions," said Thaxter.