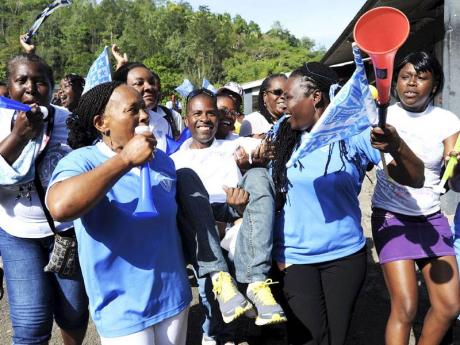 Coach of Edwin Allen High, Michael Dyke (centre), is carried by members of staff on to the school's premises yesterday where students and residents of the Frankfield community in Clarendon participated in the events to celebrate the school's historic Champs victory. - photos by Ricardo Makyn/Staff Photographer 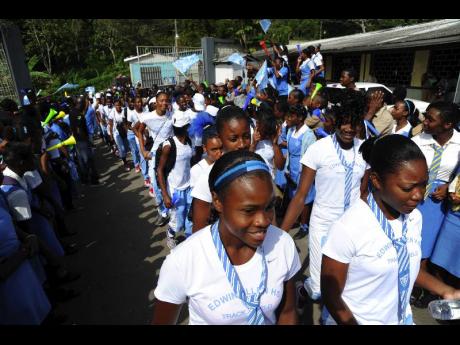 Members of the Edwin Allen High track and field team are greeted by fellow students, teachers and members of the Frankfield community as they march on to the school grounds, to participate in celebrations for winning Girls' Champs.
1
2

IT was a full house on the campus of Edwin Allen High yesterday morning as the school community celebrated its historic win at the Inter-Secondary Schools Sports Association (ISSA) Boys and Girls' Athletics Championships.

"This is a proud and historic moment for us this morning, as the girls have worked really hard and to all those who participated at Girls' Championships and to those who supported the team, along with the principal, staff, coaches and entire school community, I want to say a big thank you and we are going to ensure that we win for another 10 years as we have a very young team," said Michael Dyke, the team's head coach.

"I would like to say a special thanks to members like team captain Sasha Gaye Marston, Danniel Thomas, Shawnette Lewin, Desreen Montaque and Kimberly Williams who are leaving this year," added Dyke, who also stated that the win was a tribute to the girls who had left and have laid the foundation, like Ristananna Tracey.

The school's Principal, Everton Walters, who is in his fifth year at the institution, assured that they will be getting support to ensure they continue their winning ways.

"It is a tremendous victory and this is something we have long waited for. We have been trying for a long time and today we are in a great celebration mood for our victory. We are going to ensure that all things are in place by having a proper coaching staff, better training facilities and better dormitories for the young ladies to be more comfortable and we will be pulling out all the stops to do what we have to do to make things work better in the future," said Walters.

The celebration went on for more than three hours on the school's campus as students, teachers, parents and well-wishers from the community paid tribute to members of the winning team, including the coaching staff. Students and teachers could be seen blowing horns, vuvuzelas and whistles as they danced and pranced inside the schoolyard, as the school's band played gospel music.

Dyke, who arrived on campus at around 8:10 a.m., was hoisted by several female members of staff and taken to the platform where the principal was making his speech.

However, the moment for which everyone waited came 20 minutes later as members of the winning team entered the schoolyard. The noise levels rose significantly as the athletes, marching in twos from the dormitories some 200 metres away from the school, appeared dressed in white T-Shirts and blue track suit bottom, with team captain Sasha Gaye Marston holding the Championships Trophy. It was a carnival-like affair as the students shouted "Edwin, Edwin, Edwin, Edwin," evoking broad smiles from the athletes.

On hand to witness the occasion was former principal Elroy Ricketts and member of parliament for North Western Clarendon, Richard Azan, who congratulated the girls and the coaching staff.

"It is indeed a great achievement for the community as you have all made us very proud," said Azan, who also made a cheque presentation of $80,000 to the principal on behalf of the team. This is in addition to the $160,000 he had made a few days before Champs.

Team captain Marston, who will be leaving the institution this year, was very excited.

"We are extremely happy for this victory and I feel proud of the achievement of the team, because we have worked extremely hard and after disappointments in the past two years, we have finally done it and for members of the team like myself who are leaving, we are happy that we were able to leave on a winning note," she said.

They then marched through the town of Frankfield. With a makeshift coffin, painted in maroon and gold - depiciting the colours of Holmwood Technical and carried by two male students - hundreds of students marched through the town to the tune of drums beating, whistles blowing and also the blowing of horns as people perched on rooftops and inside buildings and stores waving to their heroes.

Following the march, members of the team, including the principal and coaches, were given a bus ride to Spalding - where Holmwood Technical is based some 45 minutes away - and continued their celebrations on a day which the community will never forget, as this was the first occasion that Edwin Allen had given them a Girls Champs win to celebrate in that farming community.