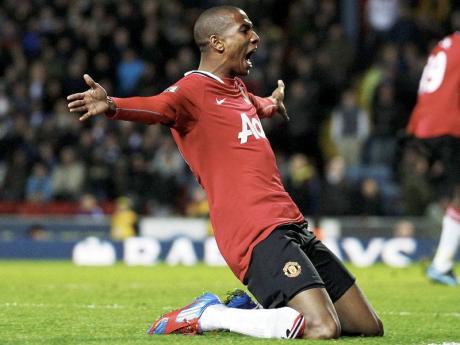 Antonio Valencia and Ashley Young scored late goals to give Manchester United a 2-0 win at Blackburn yesterday, extending the defending champion's lead to five points in the English Premier League.

With seven rounds left, United are clear of crosstown rivals Manchester City and favoured to win their 20th league title - although manager Alex Ferguson said he is taking nothing for granted.

"In my experience of these situations, it doesn't matter what the points are at the moment," Ferguson said.

Valencia cut in from the right wing and fired a swerving shot from a tight angle that flew past goalkeeper Paul Robinson and into the far corner in the 81st minute. Young made sure of the win with a low shot in the 86th.

"It was a long night. We had to persevere and persevere," Ferguson said. "We weren't making any clear-cut chances for a long time. But it was an important win and it typifies the history of the club."

Blackburn, which dropped into the relegation places on goal difference, had a goal disallowed when Morten Gamst Pedersen's 63rd-minute shot was ruled out because the ball went out of play in the build-up.

United kept the ball for long periods in the match at Ewood Park, but Blackburn"s defence kept things tight at the back to threaten a frustrating evening for Alex Ferguson's title-chasing team.

United had glimpses of goal when Jonny Evans' shot was saved by Robinson following a 34th-minute corner and Phil Jones headed over the bar from Valencia's cross in the 38th.

Against the run of play, Blackburn almost took the lead just before half-time when De Gea failed to punch a cross clear. Marcus Olsson volleyed the loose ball back at goal from the edge of the box, but De Gea redeemed himself with a flying save.

The Spanish goalkeeper, who endured a tormented time in the December defeat, produced another fine stop to tip Hanley's header from the ensuing corner over the bar and later earn Ferguson's praise.

"The progress is obvious for all to see," Ferguson said. "He's growing in stature and confidence. He made three great first-half saves. David kept us in the game."

"It could have gone either way," Blackburn manager Steve Kean said. "But you've got to take your chances. I thought we created lots, albeit on the break."