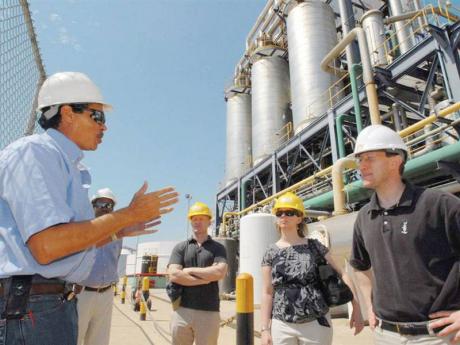 Operations and facilities manager at JB Ethanol Limited, John Carberry (right), gives a guided tour and update on plant operations to members of a United States Congressional delegation which visited the ethanol plant at Port Esquivel in St Catherine on February 20, 2009. - File

"This is something that needs dialogue. If Jamaica does not talk with the main actors in Brazil the point would not be made and an opportunity will again be lost on a partnership," said da Costa e Silva Neto at a Private Sector Organisation of Jamaica (PSOJ) trade policy forum at the Knutsford Court Hotel in Kingston.

Earl Jarrett, PSOJ chairman of the trade policy committee, noted that the expiration earlier this year of the US$0.54 tariff per gallon of ethanol entering the US from non-CBI countries has resulted in a significant decline in the price of the biofuel imported from Brazil into the United States.

The expired tariff puts countries - which benefit from duty free concessions under the Caribbean Basin Initiative - at a disadvantage, including Jamaica.

Essentially, it is now cheaper for Brazilian companies to go directly into the US rather than redirect wet ethanol to Jamaica for processing into fuel grade ethanol for shipment to the US.

Jamaica Broilers Group last month announced it would lobby US congress in an effort to reinstate the US$0.54/gallon tariff, the removal of which the company said has hindered its ethanol exports. Broilers CEO Chris Levy told Wednesday Business then that lobbying is ongoing in the US, for the reinstatement of the tariff in some modified form.

The ambassador said dialogue would allow Jamaicans to "make the point that what is going on in the Jamaican market and US market can actually benefit Brazilian companies through Jamaica. That point needs to be made," he said.

The two countries are expected to enter into bilateral talks by mid-year to improve trading relations and other areas of cooperation. Preparatory meetings to set the framework for talks are ongoing.

"Trade between Jamaica and Brazil is imbalanced but, of more importance, both should grow," the Ambassador said.

Despite its ethanol woes, JBG - which operates its ethanol business under subsidiary JB Ethanol Limited - posted a 10.5 per cent higher net profit for its January quarter at J$400.5 million over year-earlier levels.

The group's ethanol division, which is fed by feedstock from Brazil, posted a J$64.4-million operating profit over nine months ending January, which represented a 62 per cent decline over year earlier levels.