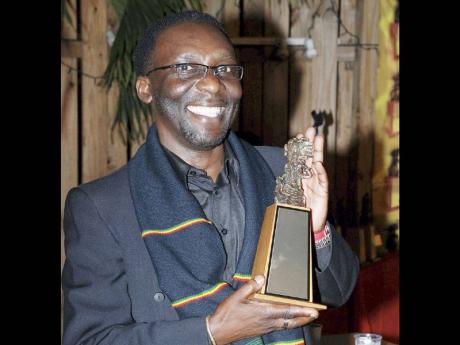 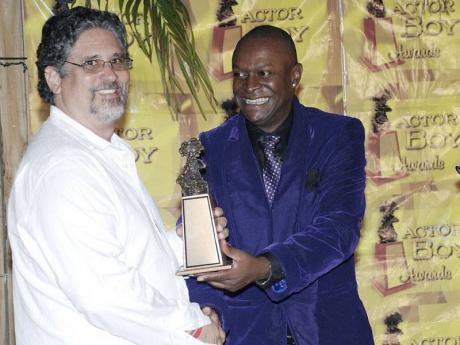 Glen Campbell (right) presents Robin Baston with an Actor Boy Award for Best Special Effects. Baston won the award as part of the production team behind 'Acts of the Apostles'. - Colin Hamilton/Freelance Photographer 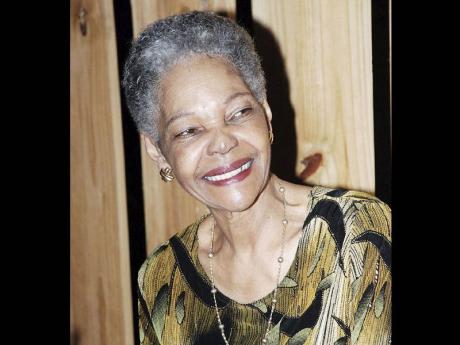 Leonie Forbes is all smiles as she enjoys the Actor Boy Awards at Chaser's Cafe on Monday. 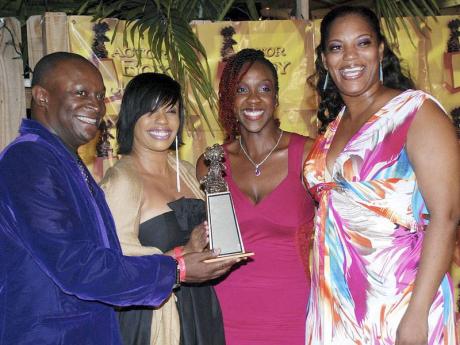 From left: Glen Campbell, Sharee McDonald-Russell, and Teisha Duncan, receive an Actor Boy Award from Dahlia Harris. The three were part of the cast of Charlie's Angels. - photos by Colin Hamilton/Freelance Photographer
1
2
3
4

While Best Production, the most notable award at the Actor Boy Awards, went to the 876 production company's Last Call, it was Acts of the Apostles that took home the lion's share of the honours.

The announcements and presentations were made at the 22nd staging of the Actor Boy Awards Ceremony at the Chasers Café located on Belmont Road on Monday.

The lively, informal, intimate affair saw the distribution of a number of awards in different categories, presented to Jamaica's thespians for their works over a "robust year". The panel of five judges reviewed 29 productions.

According to chief judge Tanya Batson-Savage, Jamaican theatre grapples with identity and the awards ceremony allows for practitioners to take a break in proceedings to review their works.

Batson-Savage also used the opportunity to acknowledge and commend Stages Productions for providing two new theatres, despite a slow economy.

Other encouraging signs were the noticeable increase in the number of young thespians, the staging of religious plays and the embracing of folklore.

Charlie's Angels also produced the lead actor in Glen Campbell, while Dionne Silvera received the female equivalent for her role in Back a Yaad.

Charlie's Angels was also deemed the Best Comedy, while the DMH-produced God's Way walked away with The Best New Play award.

The Actor Boy Award for Excellence was awarded to the School of Drama, one of four schools to make up the Edna Manley College of the Visual and Performing Arts.

Presenter Jean Small used her citation to trace the illustrious history of the school. The institution's deputy director, Pierre Lamaire accepted the award on behalf of the school.

Graduates of School of Drama, Winston 'Bello' Bell and Owen 'Blackka' Ellis were the evening's hosts. Ellis was also a recipient for his one-man comedy venture, Un.

The programme also included a tribute to those who had passed over the year as well as performances from Keisha Patterson, who made three appearances. On each occasion, she thrilled the audience with Somewhere Over the Rainbow, I Am What I Am and You Don't Love Me.

Among the notables at The Actor Boy Awards was Jamaica's premier actress Leonie Forbes. The veteran actor enjoyed the proceedings "very much." She likes when things are on a smaller scale "as everybody can be a part of it, rather than there be some distance and people can't see. I like it."