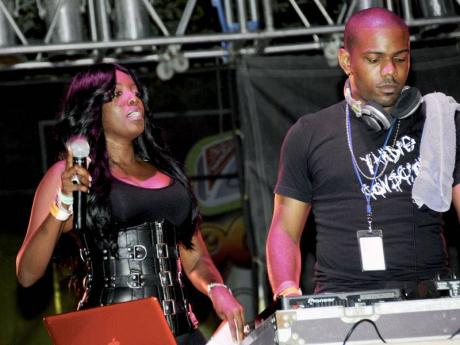 Dj Sanjay and Ashley Martin, former lead singer of Byron Lee and the Dragonaires, enjoy playing for the Bacchanal jamaica crowd at its Final Fête last Friday at the new Mas Camp. 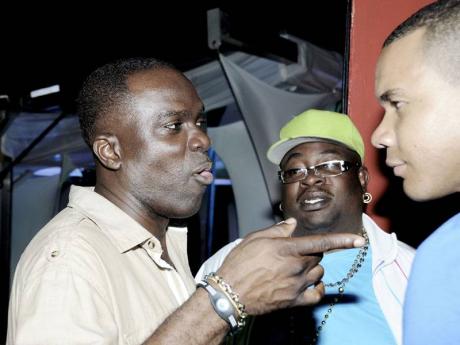 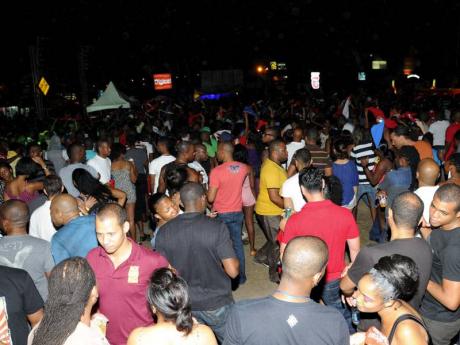 Despite the staging of the ISSA Boys and Girls' Schools Athletics Championships next door at the National Stadium and the adjusted start and end times, the bumper crowd and the fever-pitch excitement inside the new Mas Camp was a testament to the power of soca and, in particular, this year's 'Future Shock' bacchanal season.

The final fête in the Bacchanal Fridays 2012 season was a disco-themed night which gave patrons one more chance to learn the 2012 hits and prepare for the upcoming events in the season. The event also allowed sponsors another occasion for bonding more closely with the loyal patrons who have been filling the venue each week.

Patrons danced and gyrated all night to the sounds of DJ Billy and Coppershot's popular party mixer DJ Sanjay.

Both deejays displayed their talent as they moved and swayed the crowd at every turn with popular soca hits for this year, including KES the Band's Stress Away, Miss Behave by Fay-Ann Lyons, and the Groovy Soca Monarch hit song Mr Fete by Machel Montano.

Headline sponsor for the 'Future Shock' carnival season, Digicel, conti-nued its mobile credit specials for patrons and the promotion of its new $8.99 one-rate option at the event.

Smirnoff and Appleton, major sponsors for the season, continued to offer socaphiles their $1,000 mug deals, each featuring their popular colour-coded branded cups.

Pepsi Jamaica, through its party brand Pepsi Music, also hosted its 'Photo Studio', this time under the theme 'Pirates Palance'. Partygoers had the chance to take photos inside the booth using various pirate-like props. The pictures were then posted instantly on Pepsi's Facebook page and also displayed on a large screen above the booth, visible from anywhere inside the camp.

ATL Motors, who had a different vehicle on display each week, also utilised the opportunity to show off another hot one from its fleet - the popular and efficient 2012 Honda Fit.

Karim Smith, a devoted carnival fan who has attended all six of the Bacchanal Fridays fêtes, said, "This carnival season has really been a great experience for me. I loved the new venue, how spacious it was and the comfort you feel here. I enjoyed all the performances and the disco nights. I loved the giveaways, the music, the vibe, the people. I even saw a lot of my own friends here who I didn't realise were socaphiles like me. I had a great time this season and I'm looking forward to the remaining parties. I definitely will be participating in carnival again come next year!"

The 'Future Shock' season will continue on Saturday in Oracabessa, St Mary, with the staging of Smirnoff's Bacchanal Beach J'ouvert at the James Bond Beach.