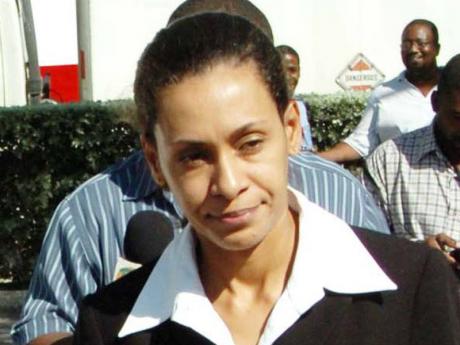 One of the attorneys for former Junior Minister Kern Spencer has charged that there are "inconsistent positions" in the ruling handed down by the Judicial Review Court last week that blocked their attempt to have Director of Public Prosecutions (DPP) Paula Llewellyn appear as a witness at the high-profile trial.

Attorney-at-law Deborah Martin would not disclose her next move, but insisted that the "inconsistencies" have to be clarified by a "higher court".

"We are of the view that the law, as pronounced on, has to be settled," Martin told The Gleaner yesterday after the case was again adjourned in the Corporate Area Resident Magistrate's Court.

Spencer and his co-accused Coleen Wright have been on trial since 2009 for breaches of the Corruption Prevention Act arising from the implementation of the Cuban light-bulb programme.

The inconsistent positions, according to Martin, centred around the two-to-one majority decision handed down by Justices Raymund King, Almarie Sinclair-Haynes and Evan Brown in the motion that was brought by the DPP.

The review court decision quashed a ruling made by Senior Resident Magistrate Judith Pusey in April last year to grant a subpoena issued by defence attorneys that would have compelled Llewellyn to give evidence.

In the lone dissenting view, Sinclair-Haynes wrote that Pusey's decision to have Llewellyn testify "is within the pursuit of justice".

Martin said even though King and Brown agreed to grant the motion brought by the DPP's office, their reasons are "not quite the same".

She also argued that the reasons given by King and Brown are "poles apart" from the view taken by Sinclair-Haynes.

"So for us (who are) representing our clients, there are two completely separate streams of thought ... the opinions are diametrically opposed," she contended.

Added Martin: "So we too are anxious for there to be a pronouncement by a higher court to guide us in how to move forward in the trial."

However, while defence attorneys are pondering their next move, Pusey yesterday indicated that she would appeal the ruling.

The legal wrangling between the DPP and Pusey started after star prosecution witness Rodney Chin's surprise testimony at the start of the trial that he met with Llewellyn and police investigators at the offices of his attorney while he was still an accused in the case.

When defence attorneys sought to find out what was discussed at the meeting, Llewellyn said no notes were taken and "with the passage of time" she could not recall the discussions.

However, following a ruling by Pusey, Llewellyn wrote to defence attorneys outlining the nature of the meeting.

This did not sit well with the attorneys, who demanded that the DPP provide a witness statement.

When she refused, the attorneys issued a subpoena - which was granted by Pusey - indicating that Llewellyn would be called as a witness and should, therefore, be barred from the courtroom while Chin gave evidence.

The case is set to be mentioned on June 8.