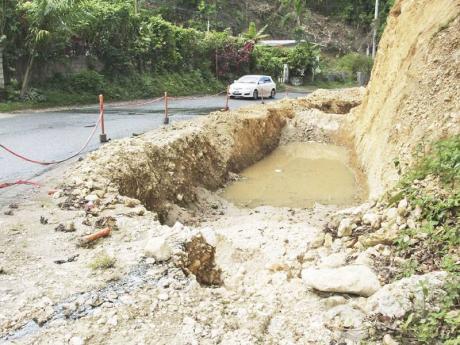 A motorist approaches Fern Gully, which is undergoing rehabilitation.CONTRIBUTED

WORK IS to resume later this month on the Fern Gully in St Ann after a stoppage, since January, to iron out issues relating to payment to contractors and subcontractors working on the $500-million road-repair project under the Jamaica Development Infrastructure Programme.

National Works Agency Communications Manager Stephen Shaw made the disclosure Monday evening in an interview with The Gleaner.

"I'm not in a position to give specifics, but work will resume later this month," Shaw said.

He added: "The problem has to do with payment to the contractor and subcontractors. Government is dealing with it, and we expect work to resume in April to finish Phase Two, which is under way, and then move on to Phase Three."

The confirmation comes a day after member of parliament for North East St Ann, Shahine Robinson, charged that the work stoppage in the middle of construction of a major drain, has put Ocho Rios at risk of being ravaged by floods.

In a release, Robinson called on Transport and Works Minister Omar Davies to have the work resume as quickly as possible.

The work stoppage has left open trenches by the side of the road in several areas, with only red plastic tape as a warning signal. However, most of the concrete work seems to have been completed.

Motorists, in the meantime, may be inviting trouble on themselves as several could be seen speeding on the narrowed roadway, which at several points is only able to facilitate one-way traffic.

The stoppage has further pushed back the completion date of the project, which has already missed several deadlines. After being closed for several months, Fern Gully reopened to vehicular traffic last December after the concreting of the roadway. Work to construct a 'U' drain and five box culverts was expected to be completed at the end of April.

Ocho Rios is susceptible to flooding because of its topography and improper drainage system.

In April 2008, a major flood ravaged the town, dumping several feet of mud on the streets in the town, causing millions of dollars in damage to businesses and personal properties. Scores of residents in outlying districts were also severely affected by the flood.