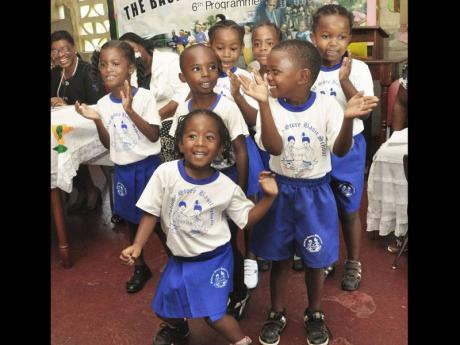 THE STUDENTS and teachers of Osborne Store Early Childhood Institution in Clarendon moved closer to achieving their dream of a fully equipped and upgraded school facility.

With funding from the Caribbean Development Bank (CDB), the Jamaica Social Investment Fund (JSIF) last week signed agreements to carry out rehabilitation work on the institution. Approximately J$15 million from the CDB and an additional J$1,560,725 from the Constituency Development Fund will be expended to improve the facility.

Scarlette Gillings, JSIF's managing director, who spoke at the signing ceremony, said, "The school was selected by The Basic Needs Trust Fund, because it met the criteria for assistance in a number of ways. The closure of the Victoria Banana Company, as well as the scaling down of operations at the Jamalco Bauxite Company, has led to economic difficulties in the area, with roughly a third of residents falling below the poverty line."

Gillings said early-childhood education is important in the development process. She reiterated that she was pleased that the JSIF was spearheading this project, as the benefits will be seen throughout the span of these 56 students careers.

Noel Arscott, member of parliament for South West Clarendon, commended the community and JSIF on the project. He said the upgraded school will ensure that quality students move on to the neighbouring primary school.

"The kitchen will also be equipped with appliances such as a refrigerator, stove, cupboard and, very important, fire-detecting and retarding system. These will be done in keeping with the Early Childhood Commission's standards."