Harnessing the power of team spirit 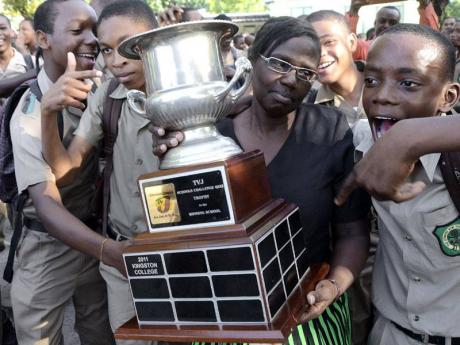 Calabar students and teacher pose with the Schools' Challenge Quiz trophy during celebration activities at the school on Monday. - Rudolph Brown/Photographer

HELLO MI neighbour! Watching the finals of the Schools' Challenge Quiz year after year continues to be a very gratifying experience. Team spirit is usually at its peak. Minds click and think together. They speak with one voice. This picture of togetherness speaks to the possibility of people working together with little or no conflict.

While conflicts may have their pluses, they present many minuses, which lead to failure. Be careful that your bright ideas do not do more harm than good. Thank you.

During the quiz, we hear and witness no disagreement among team members. There are no quarrels. There is no one trying to sap the energy of the team or trying to star the show. Put simply, nothing is done for personal aggrandisement.

If you watched the neck and neck race between Titchfield and Calabar on March 28, during the final hour of School's Challenge Quiz 2012, you would agree with me that more than anything else, for me, was the team spirit, which permeated both teams. This spirit kept them going.

No one blamed anyone for suggesting wrong answers. They took collective responsibility for each outcome. As the pressure mounted in such a keenly contested match, someone could have easily lost his or her cool. Each team, backed by an overwhelming support from the respective school population, was confident of victory. At the end of the first segment the score was 8-8.

Still burning with a passion to win the match, both teams ended the speed segment with 27 points each - no one relenting. The buzzer segment saw both teams still firing on all cylinders with increased energy and confidence. Unfortunately for Titchfield High, however, when the last bell went, Calabar stood at 37 points with Titchfield standing behind with 31. As I watched Calabar celebrate, I offered congratulations to them for allowing team spirit and hard work to lift them to the top. May this spirit guide them through life.

When all is said and done the high point of the match, for me, was the reaction of the Titchfield camp - they lost the match, but they won our hearts. We witnessed something which Jamaica had been waiting for, for many years. Titchfield was not dejected by the loss. They celebrated their superb performance. Had it not been for a few bleeps and blunders they could have won the match.

Their resolve is to use the experience gained to prepare them for the next time. Could there be a better ending? No, because what appears to be an end is really the beginning of the journey to success. What lesson can we learn from this? As you reflect on that question, remember that when you love your neighbour as yourself there is no limit to what you'll do for them - the experience offers unlimited gratification.

1. Neighbour, for donation of baby clothing.

2. Mr Carby, St Andrew, donating a wheelchair and television to a needy family.

4. Ms Brown, Manchester, for offering a toilet bowl to a single mom with four children, Trelawny.

Ms Clarke, 84 years of age. Got a stroke and is in need of an adjustable hospital bed.

Adinica, St Catherine, unemployed. Grandmother who got a stroke and needs adult diapers.

Michelle, St Andrew, unemployed - child goes to school in crushed uniform and oftentimes without food. Asking neighbours for food and a clothing iron.

Thirteen-year-old student needs a wheelchair. She is unable to go to school for a month now, because her wheelchair is broken.