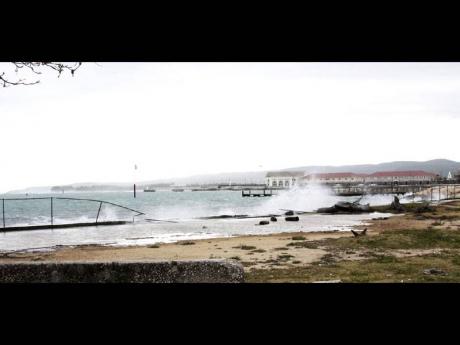 The broken fence near the Falmouth All-Age School. - photo by Richard Morais

The destruction of the security fence at the Falmouth All-Age School by wave action continues to be of concern as it poses a security risk to students. The road to the east of the wharf is also being eroded.

The chain-link security fence was torn down and a small section of the school's property inundated recently. While this has happened before in extreme weather, residents say that the problem has worsened since the cutting of the reef to facilitate the building of the wharf.

Residents complain that while measures were put in place to protect a property next to the school, nothing was done to ease the burden on the school. Large boulders were placed in the sea to lessen wave action but nothing done directly for the school.

Principal of the school Talbert Golding said he was livid and although the school was implementing stopgap measures by using wooden posts which can withstand the water, he still wanted more to be done by the authorities.

The Ministry of Education has also sent a team to investigate the matter.

Commuters are concerned about erosion to the main road near the wharf - about 100 metres away to the east. They believe that this has been left by the authorities for far too long. While this spot may be the worst affected, there are other sections along the coastline that have been eroded.

Mayor of Falmouth Garth Wilkinson agreed with the other residents and asserted that mitigating measures must be put in place. "My concern from day one was that the eastern side and the western side of the port was not properly protected and I am now insisting that boulders be placed along both sides of the port. I have spoken to the minister about it," he said.