The making of a city - Pt II 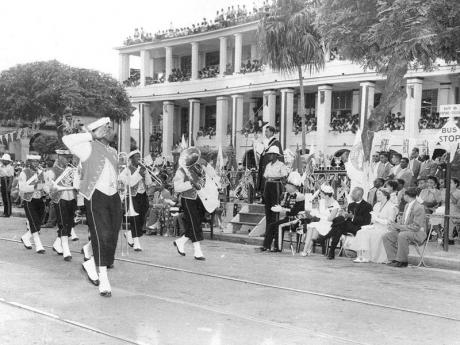 In their picturesque Zouave uniforms, the Jamaica Military Band led by Band Sgt Major Stewart added a splash of colour to the parade. Playing martial music, they passed the saluting base where the mayor raised his hat in salute. - File photos 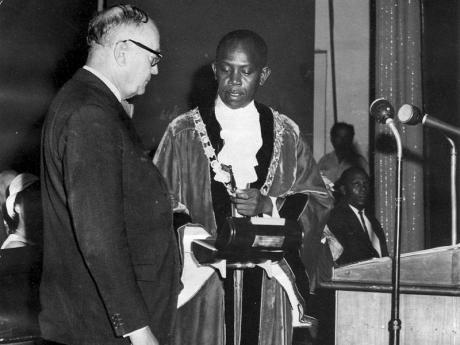 The Mayor of Kingston, Councillor Leonard Currey presenting the Keys of the City of Kingston to Philip Sherlock, vice-chancellor of the University of the West Indies, at a civic reception at the Ward Theatre, in the 1960s. 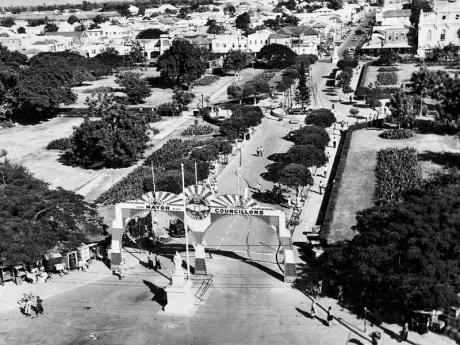 Panorama of downtown Kingston showing the Christmas greeting and Jamaica 300 arch erected in Victoria Square by the Kingston and St Andrew Corporation in the centre of Victoria Park.
1
2
3

THE EIGHTEENTH century Caribbean was a period of great military activity among rival European nations. Their colonies were the subject of trade rivalries waged in order to protect their economic interest. Fear of invasion was rampant among the citizens of Kingston and it took on the appearance of a military town. Emphasis was now placed on the Parade; soldiers were drilled here, military barracks were established and the original plan of the city with its 66-foot wide streets facilitated the movement of military equipment.

Until the end of the 17th century, all the governors of Jamaica, with the exception of Sir Henry Morgan were civilians.

Henry Morgan became the captain and leader of the buccaneers in 1667. They carried out many raids on Spanish towns. Morgan's most famous exploit was the capture of the city of Panama in 1671, for which he was knighted and returned to Jamaica as lieutenant governor.

By the 18th century, Kingston had become not only the commercial centre and principal port of Jamaica, but also the main rival to Spanish Town as the political capital of the island. While the Court of Common Pleas and the Jamaican Assembly had met in Kingston as early as 1704, it was not until 1755 that the influence of the Kingston merchants was sufficient to outmanoeuvre the planters' Legislature of Spanish Town and remove the capital to the larger, more commercial settlement of Kingston.

Twice the assembly rejected the bill, but finally gave way and the law was passed in 1755. Soon after, the archives were removed to Kingston and the superior courts were established there. However, the change was unpopular throughout the island and a number of petitions against it were sent to the King. By October 3, 1758, the law was disallowed and the records were returned to Spanish Town, accompanied by a large body of the military.

Despite the repeal of the law, Kingston continued to prosper. Its prosperity was shown in the poll tax of 1768, which stated:

"The town - pays about two thirds more than the other two counties in the article of horses, wheel, and rum tax."

In addition, Kingston had 1,605 houses, four times the number in Spanish Town, her closest competitor.

In 1802, Kingston was recognised as a city and was granted a mayor, alderman and common council.

By 1865, representative government was replaced with Crown Colony Government and Kingston ceased to be a municipality. All the powers of the common council were transferred to a nominated municipal board created by Law 8 of 1866. Added to this, the privilege of making ordinances for the regulation of the city was transferred to the governor. In 1885, however, Kingston again became a corporate city and its affairs have since been administered by a mayor and city council.

The long-awaited transfer of the seat of Government from the old city of Spanish Town to the bustling, convenient, commercial centre of Kingston, finally came in 1872. The governor, Sir John Grant, gave his consent, with the approval of the secretary of state for the colonies. The Legislative Council was thereafter convened in Kingston and a chamber for its deliberations was located in the large hall on the lower level of Headquarters House.