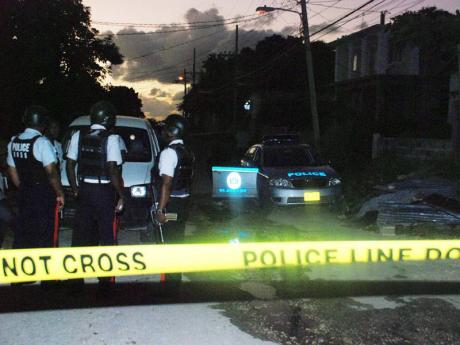 Policemen at the scene of the murder of Sergeant Alan Lindsay, who was gunned down in Glendevon, Montego Bay, in 2007. - File

Despite being stigmatised in regards to criminal activities, the Social Development Commission (SDC) is reporting that many residents in the Glendevon and North Gully communities, in St James, are expressing mixed feelings about safety.

The SDC unveiled the profiles of the two communities during a forum held at the Wexford Hotel, in Montego Bay, last week Thursday. Representatives from both communities, the Peace Management Initiative and the Citizens Security and Justice Programme were in attendance.

According to Glendevon's report, 70 per cent of residents said they feel safe or very safe in the community; 88.9 per cent saw Glendevon's crime level as low to moderate; and 65 per cent thought it unlikely that they would become crime victims over the next year.

By contrast, 17.6 per cent felt unsafe or very unsafe in Glendevon; 6.3 per cent thought the crime level was high or extremely high; and 33.8 per cent felt that it was either very likely or inevitable that they would become victims of crime.

Meanwhile, an overwhelming 73.7 per cent of North Gully's residents felt it was very likely or inevitable that they would become victims of crime. On the other hand, 48.2 per cent felt safe or very safe living in North Gully while 54.3 per cent thought the crime level in their area was low to moderate.

The reports also outlined that several key factors including a reduction of youth and adult unemployment and improvement of residents' skill levels are needed to influence the development of both communities.

"We have gone through a number of field activities out there; a number of stakeholders have been contacted and have been integrally involved with these projects, and I must say thank you for the tremendous support and you have endorsed this process where communities can chart their own development," said Randy Hayles, SDC parish manager for St James.