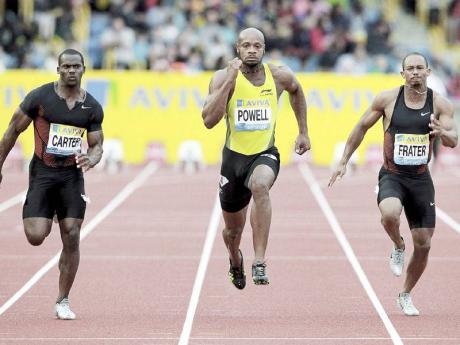 If organisers of the fifth instalment of the UTech Knights Invitational Track and Field Classic have their way, patrons could be in for a spectacle that would not be out of place on the biggest of track and field stages.

The April 14 meet to be held at the National Stadium could be the battleground on which two of the biggest track clubs in the world meet, as some of the top athletes from the UTech-based MVP and the UWI-based Racers are poised to line up against each other.

If this were to materialise, the race that would take top billing is the men's 4x100m, according to meet manager Paul Francis, while speaking at yesterday's press launch at the Courtleigh hotel in Kingston.

"The thing that stands out most, because it is something that people have been asking for, is the opportunity to see the top MVP - remembering that MVP has Asafa Powell, Nesta Carter, Michael Frater, among others, versus the top Racers track club team, remembering they have Usain Bolt, Yohan Blake," Francis disclosed.

"They (Racers) have committed to putting their best team out. The question that has caused a lot of argument, people have been wondering who is better, and they are getting the chance to see," he added.

"So it is possible that Yohan Blake and Usain Bolt and other Racers athletes could come and challenge Asafa Powell, Michael Frater and Nesta Carter based on how the entries have come in," James disclosed.

"We are hoping to be able to confirm this, but this is what we are expecting, and it is the same on the girls' side for the 4x100m as well as the 4x400m for both men and women," he added.

Kevin Stewart, administrator for Racers, was unable to verify the Racers athletes that will be in attendance, but did state that given the time of the season the athletes who participate are likely to do their pet events.

"It is coming down to crunch time now where we only have two more months to national championships, so the athletes are really buttoning down now and doing their pet events, so they should be doing their natural events coming into this championship," Stewart revealed.

The best sprint teams from the top high schools will also be trotting their stuff at the four-hour meet. Unlike other local meets, the high school athletes will not be grouped by classes (age) and will clash in their only race of the day, therefore, their coaches can easily mix the teams in preparation for Penn Relays later this year.

"You may have seen a Kingston College, for argument sake, running a very good 40.17 (seconds) at Championships (in the boys' 4x100m Class One), they are not necessarily the best high school team," Francis argued. "When you look at Jamaica College that ran 40.75 (seconds) in Class Two and they have the bronze medallist (Nathanee Mitchell-Blake) in the 200m in Class One, they are going to get stronger. So there is speculation as to who is the best."

The meet is slated to get start at 4:30 p.m. with an opening ceremony, and action is set to get under way at 5 p.m. and last for four hours. A new feature of this year's staging will be a couple of races contested by Paralympians.

International competition is also a feature. A12-member contingent is expected from Trinidad and Tobago, along with four athletes from Colombia, an unconfirmed number from Cuba, and individual athletes from Barbados, Botswana, the United States and Britain.

It will cost patrons $700 to enter the grandstand and $200 for the bleachers section.