Fraser-Pryce, Jeter to face off at adidas Grand Prix 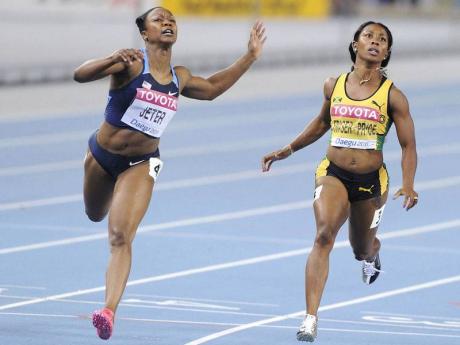 Three of the top four women in the world, including the reigning World and Olympic champions, will headline the 100-metre dash at the adidas Grand Prix on June 9, organisers announced yesterday.

Carmelita Jeter, Kelly-Ann Baptiste and Shelly-Ann Fraser-Pryce, ranked Nos. 1, 3 and 4 in the world for 2011, will do battle in the short sprint, while a resurgent Jeremy Wariner will return to Icahn Stadium to defend his 400-metre title.

In its eighth year as one of the premier track and field events in the world, the adidas Grand Prix, at Icahn Stadium on Randall's Island, will feature dozens of Olympic medallists and World champions, including the reigning World champion at 100 metres, Jamaica's Yohan Blake. It will again be the sixth stop on the international Samsung Diamond League circuit, and is part of the Visa Championship Series.

On her way to being ranked No. 1 in the world at 100 metres for the third consecutive year, the 32-year-old Jeter won gold at the 2011 IAAF World Championships at 100m and silver at 200m, as well as anchoring the United States squad to a gold medal in the 4x100-metre relay. The second-fastest woman in history with a personal best of 10.64, Jeter was dominant from start to finish last year, winning 11 of her 12 competitions at 100 metres.

Fraser-Pryce, at 25, is the reigning Olympic gold medallist and 2009 World champion at both 100 metres and the 4x100-metre relay. Finishing fourth, just 1/100ths of a second behind Baptiste in Daegu, South Korea, for bronze last summer, Fraser-Pryce nonetheless ran the first leg on the Jamaican 4x100-metre team that set the national record on the way to winning a silver medal.

Baptiste, from Trinidad and Tobago, is the 2011 World Championships bronze medallist at 100 metres and the 25-year-old's personal best of 10.84 is a national record.

He also owns five World Championships titles, including individual gold in 2005 and 2007, and has five times (2004-2007, 2010) been ranked No. 1 in the world. On the comeback trail from a torn toe ligament that kept him out of the World Championships last summer, Wariner anchored his Central Texas All-Star 4x400 relay team to victory on March 31 at the Texas Relays. He and his wife, Sarah, married last November, are expecting their first child in October.

The adidas Grand Prix will begin at 1 p.m.