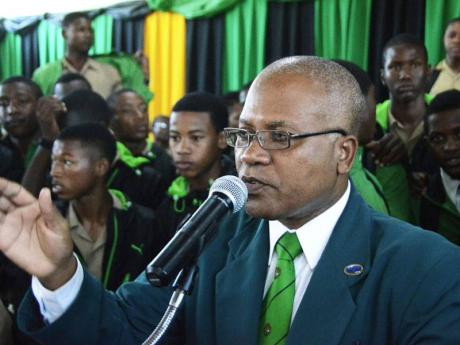 It cost over $8 million to return the Mortimer Geddes Trophy to Red Hills Road, where Calabar High School continues to celebrate its 22nd lien on the Inter-Secondary Schools Sports Association (ISSA)/GraceKennedy Boys and Girls' Athletics Championships.

Team manager, Andrea Hardware, who has now seen three Calabar victories during her tenure, gave The Gleaner some insight into the expenses incurred throughout the campaign, including training, medical and transportation costs.

"We put a budget together this year and it was close to $8 million, not including coaches' salaries and that sort of thing," said Hardware, who underlined what she described as a solid support network as the major financial muscle behind the programme.

"We have some very committed supporters and they are the ones that push the programme. The school does make a contribution, but we have a lot of well-wishers, both corporate and individuals, who support us a lot financially.

"It takes significant resources, money and time because we are all volunteers. You have to love it - long nights at meetings, when a boy's nose is running, they come to you, when they are having trouble with their SBAs, they come to you. So it's difficult on many levels," Hardware added, highlighting the challenges of managing a team at this level.

"I didn't realise this day would finally come in the way it has. The win was tremendous, we had our nervous moments but it's just amazing. What we were able to accomplish in the 100th year of the school is even more significant," she added.

Worth a whole lot

For principal, Major Lincoln Thaxter, the investment is worth a whole lot more than a national title or school glory, but is also a definite contribution towards human development.

"It (the investment) is worth it, not only for the school's glory, but for the personal development of the boys, and the fact is that they can use it as a sort of stepping stone for their future careers," said Thaxter.

"We have to big up the coach and a very silent and very committed old boy by the name of Dr Donald Philliber, who has been financing the Calabar track team and the coaches for both athletics and football. And I want to pay special tribute to him for his commitment over the years, whether we are up or down," said David Fitz-Henley, a former head boy and teacher at Calabar.

Calabar withstood a late burst from rivals Kingston College to lift the title after tallying 287.5 points to KC's 265.