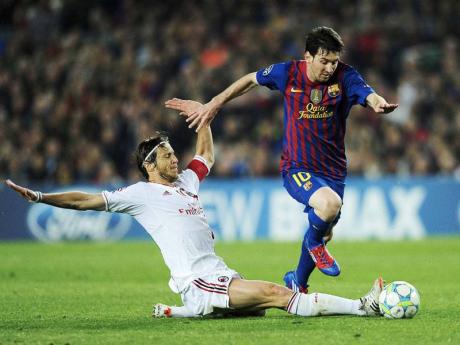 Lionel Messi swept holders Barcelona into the Champions League semi-finals for the fifth successive year yesterday while becoming the competition's most prolific scorer in a single season.

The Argentina forward scored a pair of first-half penalty kicks and Andres Iniesta added another goal after the break to give Barcelona a 3-1 victory over AC Milan, following a 0-0 draw in Italy.

Bayern emulated their 2-0 first-leg victory over Marseille to advance 4-0 on aggregate.

Bayern will likely face Real Madrid in the semi-finals, with the Spanish leaders protecting a 3-0 lead over Cypriot team APOEL Nicosia today. Chelsea will play Barcelona in the last four if the London club can defend a 1-0 lead over Benfica.

But with Pep Guardiola's side seemingly impervious in Europe, Barca are primed to become the first team to defend the European Cup since the Champions League's inception in the 1992-93 season.

Protecting Messi will be key, though, with the Argentina forward having already netted 58 goals this season in all competitions.

He slotted his first into the net after 11 minutes at the Camp Nou after being brought down in the penalty area by Luca Antonini.

There was a brief response from the Italian champions against the run of play, with Antonio Nocerino levelling in the 32nd.

Robinho picked out Zlatan Ibrahimovic and the former Barcelona striker slipped the ball through for Nocerino to strike past Victor Valdes.

But that away goal wasn't enough for Milan as Messi restored the hosts' lead in the 41st from the spot after Alessandro Nesta hauled Sergio Busquets down. Messi's 14th European Cup goal of the season matched Mazzola Altafini's 49-year-old record.

While he was denied a hat-trick at the start of the second half when a shot was blocked, the ball fell for Iniesta to extend Barca's lead from a tight angle.

"We had to work really hard against a great side and we are thrilled to be in the semi-finals,"" Iniesta said.

Milan have not reached the semi-finals since winning the Champions League in 2007.

But Bayern are into the last four for the second time in the three years, thanks in part to Bayern coach Jupp Heynckes resting Mario Gomez in favour of Olic. And on a rare start, Olic delivered.

His first goal was an easy tap-in into the net in the 13th after former Marseille player Franck Ribery glided past the visiting defence to set up the Croatian.

Ribery also helped to create the second by feeding David Alaba down the left flank, and the Austrian midfielder crossed for Olic to nip ahead of his marker and score from close range.