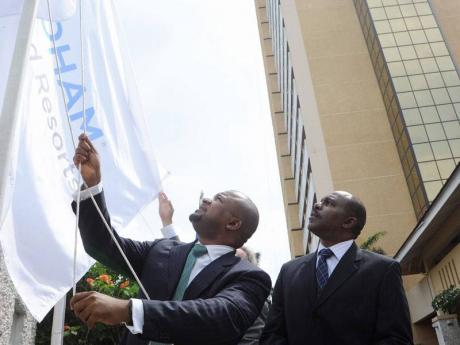 In this Gleaner photo of July 1, 2010, the Wyndham Resorts flag is raised at the New Kingston hotel by (from left) Delroy Howell, chairman and chief executive officer of Ocean Chimo, owner of the hotel property, and Kenarthur Mitchell, director of Ocean Chimo. - File

Following the failed application by Delroy Howell's Ocean Chimo Limited for an injunction against the RBC Jamaica, formerly RBTT Bank Jamaica, to prevent the sale of its hotel in New Kingston, the property has now been placed on the market to recover billions in debt.

The hotel currently operates under the Wyndham brand.

Coldwell Banker Jamaica is marketing the full-service, 303-room property, which was bought in 2008 by Ocean Chimo for a price in the ballpark of US$50 million.

Attempts to reach Howell of Ocean Chimo and the management of the Kingston hotel for comment were not successful.

However, Ocean Chimo's last annual returns indicated that the company was US$28.899 million - approximately J$2.5 billion) - in debt at the end of 2010.

Ocean Chimo, in the civil application, was in search on an injunction, to prevent defendants RBTT Bank Jamaica Limited and RBTT Bank Limited from appointing a receiver, which the bank had the power to do under debenture.

Ocean Chimo was trying to buy time to sell the company's assets, which formed part of the security for the loans. RBTT held mortgages over the hotel property as well as a debenture over its fixed assets.

Ocean Chimo, in its application for the injunction, accused the bank of "unfair tactics" and insisted that "the appointment of a receiver would prejudice a sale agreement" which the company said it had secured for the property.

"The banks have denied Ocean Chimo's allegations and assert that they are entitled to utilise the rights provided to them by the debenture; that being the agreement between the parties and the security for the loans," the document said in its introductory brief.

Attorney-at-law Topaz Johnson of DunnCox, who instructed the lawyers for the defendants RBTT, said Wednesday that the Ocean Chimo failed in its application and noted further, "the Companies Office will show that there was appointment of receiver in January."

Those documents actually show that Kenneth L. Lewis of the firm Mair Russell Grant Thornton was named receiver/manager on August 19, 2011 by RBC Jamaica.

In May 2008, Delroy Howell's Cayman firm First Financial Caribbean was reported to have paid about J$3.5 billion equivalent to acquire the then branded Hilton Kingston hotel property.

At the time, Howell also indicated that First Financial would spend an additional US$15 million on improvements, and was planning to expand the hotel's operations as well as renovate the structure which was then managed under the Hilton marque.

In mid-2010, Howell struck a new deal with Wyndham Hotels to run the property.

The value of the hotel is unknown. Comparatively, the slightly larger Jamaica Pegasus was sold for US$11 million or close to J$1 billion, but the deal was for 59.8 per cent of the shares in the hotel company that owned the property.

Real estate experts say the Pegasus sale cannot be used as a basis for comparison because the deal was only for some of the shares.

"The original sale price is a better reference point, combined with appreciations since that time. However, in the hotel business, it is profit which determines value," said Edwin Wint, CEO of La Maison Property Services.

"This kind of real estate cannot be valued like others, but will be affected by how profitable it is. If the hotel has been experiencing good turnover, high occupancy and good profit, then the value will be there," he said.