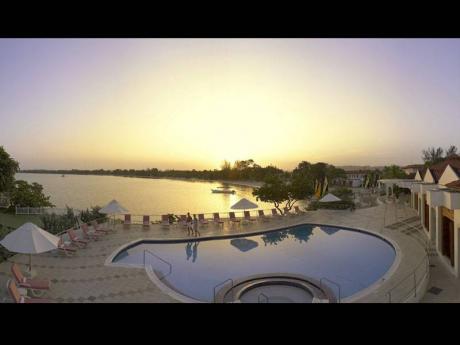 A section of Grand Lido Negril as seen in 2008. The property has been rebranded Breezes Grand Resort & Spa. - File

The SuperClubs hotel group says it is in the process of buying out its partner, the Urban Development Corporation (UDC), which owns half of the Breezes Grande Negril, a 200-room resort sitting on 22 acres at Bloody Bay.

The property was once known as Grand Lido Negril.

SuperClubs' vice-president of marketing and environmental affairs, Zein Issa-Nakash, said the hotel group accepted an offer from the Jamaican Government for its stake in the property.

The price was not disclosed.

SuperClubs has controlled the asset since 2000. Chairman John Issa used Village Resorts to partner with the UDC to buy the property from a Finsac-controlled company called International Hotels.

Each paid half of the US$9 million for the stake in the property, beating out a similarly priced offer from Guardian Life, according to Finsac disclosures at the time.

Issa-Nakash said Monday that the original purchase resulted in each entity owning 50 per cent of the hotel.

The UDC said in response to Financial Gleaner queries that its 50 per cent holding in the hotel is held through the company Bloody Bay Hotel Development Limited, and that the sale was being handled on its behalf by the Development Bank of Jamaica's (DBJ) National Enterprise Team.

UDC said a sale deal had not been finalised.

"The consideration for this transaction ... is still in progress and no agreement has yet been arrived at. The ownership structure therefore remains unchanged," said the UDC corporate communications office.

DBJ, in turn, refused to confirm that it had approached SuperClubs or otherwise clarify whether the asset was publicly tendered.

"The DBJ is not at liberty to divulge any information regarding the transaction as the privatisation is in progress," said spokeswoman Claudette White on Tuesday.

"Once the transaction is concluded the press will be advised."

SuperClubs, meanwhile, is closing the deal on the sale of another hotel it also bought from Finsac in 2000, now known as Breezes Trelawny Resort & Spa. The buyer and terms of that sale have not been disclosed.

The property will be shuttered on May 31 to facilitate its takeover by the new owner.

The sale cuts the portfolio of SuperClubs properties to 10 hotels, half of which are in Jamaica.

"Braco and Superfun were hotels that we had leased and those lease agreements had come to an end," Issa-Nakash said. "This - Breezes Trelawny - is the first hotel that was purchased from us."

"Of the ten hotels left, half are owned; the others are leased or managed," said Issa-Nakash. "We still have five hotels operating in Jamaica which is not an insignificant number."

In a market where Spanish investors have redefined the size of large hotels in the past decade with properties of up to 1,000 rooms, Issa-Nakash now identifies a big challenge facing the SuperClubs chain as its "relatively small size with rising costs; so, our strategy is to try and expand the size of the hotels we operate."

Breezes Bahamas will be tackled within the next 12 months.

"We have approved working drawings for an expansion of Breezes Bahamas," said Issa-Nakash.

The chain has continued the shuttering of its larger properties on the island, with the latest being Breezes Trelawny Resort & Spa, which, the group states, has been sold to an overseas operator and which will close on May 31 after 10 years of operation.