The diplomatic importance of hugs 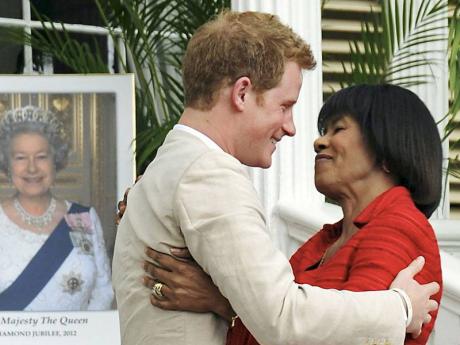 DURING LAST month's royal visit, the prime minister's stretching of protocol to warmly embrace Prince Harry and hold his hand, and the clowning antics of Usain and Harry posing 'bolt' gestures together for the cameras, may have seemed rather silly and unprofessional at the time. But that body language was in fact profoundly successful diplomacy, prominently featured in international media coverage in what amounted to a public-relations coup for Jamaica's reputation abroad.

From my remote vantage point here in New Zealand, and judging from conversations with friends in a number of other countries, the consensus is that it's hard to imagine a more thorough contrast - in terms of Jamaican national image management - between these recent events of 2012 and those angst-filled months of 2010 when, before the eyes of the world, we winced at headlines like 'US demands for extradition of notorious gang leader expose island paradise as violent narco-state teetering on edge of chaos'.

Instead, as a welcome counterpoint to those 2010 media reports, last month we were treated to glowing, Jamaica-friendly BBC News quotes from Prince Harry - that on his "emotional trip" he was "choked up" by the "warmth of the reception that we've received", and that as a result, he felt he could not just "sit there with a stiff upper lip and crossed arms and not get involved". Similarly, The Telegraph noted that the hugging and hand-holding "defused any awkwardness ... as they got to know each other". And Australia's The Age observed that "Jamaica's warm and gracious embrace of Prince Harry" had successfully "reassured those who had expressed concerns".

One does not lose professionalism by hugging, as Simpson Miller did, nor by joking, as Usain did - one gains diplomatic points and strengthens alliances. A hug is, after all, a quick litmus test of character. How sincere one is, or is not, will show. You can fake verbal language with rehearsed lines or a teleprompter, but it's much harder to convincingly fake body language. People can tell. If either side has hesitation about the interaction, or is less than sincere, or has ulterior motives - that will become evident.

Submitting to a hug also requires that one symbolically yield and let down one's guard, thereby acknowledging that it is in fact possible, which softens opposition. Thus, starting a diplomatic interaction with a hug weaves a context of possible unity of common interest, and common humanity; it makes it easier to explore more graciously (and professionally) the existing differences, rather than starting symbolically 'apart', with emphasis on the gaps.

According to Dr Paul Zak, a neuroeconomist at Claremont Graduate University and author of The Moral Molecule, these mutual behavioural effects are also related to the fact that a hug is likely to cause oxytocin release, which in turn "increases the chances that this person will treat you like family even if you've just met him or her. We touch to initiate and sustain cooperation. That's a pretty neat trick for a little nine amino acid molecule".

That, in turn, places in interesting light The Telegraph's editorial observation that the recent meeting with Prince Harry "was more like a mother greeting her son than a politician greeting a visiting dignitary". Perhaps Simpson Miller is a shrewder negotiator than we might think.

So if you've been cynically thinking the prime minister's penchant for "hugging in friendly rivalry" is a national embarrassment, think again. The diplomatic effectiveness of this practice apparently has considerable support from the scientific community, and it's an endearing cultural treasure - the Jamaican trademark embrace, with that folksy style (however, mythical and stereotyped it might actually be) that to the world symbolises the warm heart and sunny beaches of Jamaica.

Sometimes, Simpson Miller may seem too proletarian, too Pollyannaish to Jamaicans when we interface with global institutions and leaders. But as seen from the perspective of outsiders, this informal demeanour in fact conveys a disarmingly charming body language, flavourful diction, and colourful attire ... all of which perform the necessary function of endearing Jamaica to a competitive, potentially hostile world, and overcoming obstacles in subtle, subliminal ways that rational argumentation and professionalism alone never could.

Lawrence Alfred Powell is honorary research fellow at the Centre of Methods and Policy Application in the Social Sciences at the University of Auckland, New Zealand, and the former polling director for the Centre for Leadership and Governance at UWI, Mona. Email feedback to columns@gleanerjm.com and lapowell.auckland@ymail.com.