St Elizabeth gets a glimpse of '50 Golden Moments' 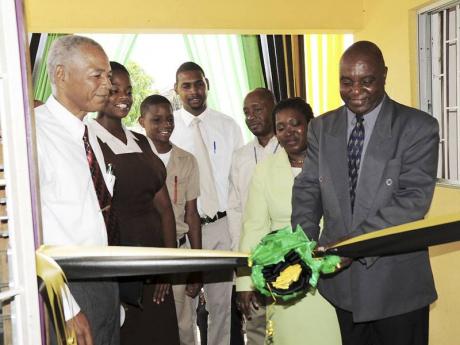 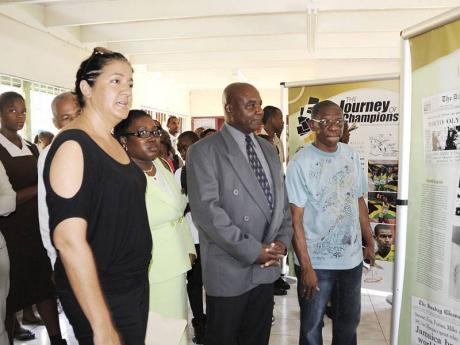 The book 50 Golden Moments, which will take readers on a colourful journey through the half-century since Jamaica gained Independence, will not be available to the public until July. However, on Wednesday, residents of St Elizabeth got a taste of what to expect.

The early exposure came during the launch of The Gleaner's Scotiabank-sponsored archival exhibition dubbed 'Journey of Champions: 50 Years of Athletic Excellence' at the St Elizabeth Parish Library in Black River.

"Sports, culture, politics, industry and more are captured in this 200-page book that climaxes with the visit of Prince Harry last month," said associate editor at The Gleaner, Byron Buckley, while speaking at the ceremony. "We believe the book, 50 Golden Moments, is a valuable addition to personal and corporate book collections."

The book is being published by Ian Randle Publishers in collaboration with The Gleaner Company.

The exhibition, which showcased The Gleaner's rich collection of photographs and clippings of Jamaica's track-and-field history, captured the country's pre- and post-Independence athletics exploits.

Funded entirely by Scotiabank Jamaica and ably supported by the Jamaica Library Service, the exhibition is part of The Gleaner's dynamic and unprecedented 14-month track-and-field coverage programme, dubbed 'Daegu to London', which kicked off last June.

"In this our nation's jubilee year, it is even more wonderful that we have come into our own as an athletics powerhouse," said Neysa Ebanks, branch manager of Scotiabank Black River. "When the world's attention is directed to London this summer, more than anything else, the excitement will be about the Jamaicans."

Ebanks added: "As a sponsor, it was important to Scotiabank that the exhibition be shared with as many people as possible and, of course, we are delighted that the parish-library network will serve as host. The libraries remain an important touch point for Jamaicans, including students, and for us at Scotiabank, we want to see more people engaged and inspired by the creative art," added Ebanks.

According to Buckley, another Jamaica 50 initiative by The Gleaner Company is the recognition of trailblazers - people who have been outstanding in their professional fields since Independence in 1962.

The exhibit also displayed photographs from the just-concluded Inter-Secondary Schools Sports Association/GraceKennedy Boys and Girls' Athletics Championships, which should be a source of inspiration for participants in the upcoming Jamaica Athletics Administrative Association/Supreme Ventures Limited National Senior Championships in June.