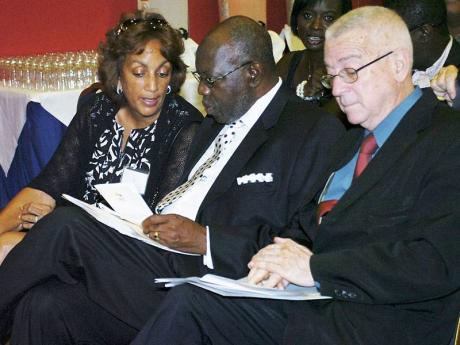 Dr Fenton Ferguson (centre), minister of health, converses with Eleanor Miller of the We Care for Cornwall Regional Hospital Foundation during a ceremony held by the American Friends of Jamaica at the Iberostar Hotel in Montego Bay, St James, yesterday. Also pictured is the Reverend Ronald Thwaites, minister of education. - Photo by Christopher Thomas

Health Minister Dr Fenton Ferguson has announced that a specialist paediatric hospital promised to western Jamaica will be built within the next four years.

Speaking at yesterday's American Friends of Jamaica (AFJ) Grant Award ceremony at the Iberostar Hotel in Montego Bay, St James, Ferguson noted that the plan for the western Jamaica-based children's hospital was one of the agenda items in the People's National Party's (PNP) 2007 general election manifesto.

"We've sparked some initial discussions, but since the return of the PNP administration, the children's hospital is again on the agenda. As health minister, I have taken it up with fixity of purpose," said Ferguson.

Ferguson stated that, once completed, the facility would satisfy the needs of those persons who are now forced to travel to Kingston to seek specialist treatment for their children.

In outlining that the new facility would be sited on the grounds of the Cornwall Regional Hospital in Montego Bay, Ferguson further said that the paediatric hospital would have numerous specialist features which he did not reveal. However, he did point out that financing for the project has not been identified.

"It is going to take probably three to four years to complete the hospital," the minister said. "We are not just looking at giving paediatric service, we want a specialist hospital ... with specialised services."

He said: "For instance, there are those who would argue, why not just put on an extra wing or expand the present paediatric ward (at Cornwall Regional Hospital). No, we want a specialist hospital which will now bring Jamaica to the state of two specialist children's hospitals."

During the function, the AFJ presented 21 monetary grants to local health and educational institutes and youth-centred charities in Jamaica.

The grants, valued at US$120,000 (J$11 million), included present-ations to the St Andrew Care Centre, the Association for Oral Health Advancement, the Cornwall Regional Paediatric Ward, and three bursaries and a scholarship presented to the University of the West Indies.