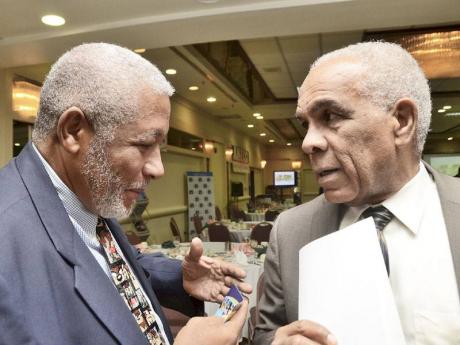 TRANSPORT MINISTER Dr Omar Davies is promising a shake-up for the sector. Speaking at Tuesday's Jamaica Employers' Federation CEO Breakfast, Dr Davies addressed some of the challenges of the 'super ministry' noting that it covers nearly 30 entities including the Jamaica Urban Transit Company (JUTC). With JUTC Managing Director Rear Admiral Hardley Lewin in the audience at Wyndham Hotel, New Kingston, Dr Davies outlined plans to maximise collection from the fare box, increase the number of buses on the roads, maintaining them and reducing accidents.

"We are clear in terms of what needs to be done. Any improvement ... must depend on the Government taking full charge of the transportation system and imposing discipline on it," he said. Davies said there will be one clear policy-standard level of discipline for all members of the sector, whether those employed to the State or private entrepreneurs. He acknowledged the sector employs many, but action had to be taken.

"The reality is, the society cannot permit the present level of indiscipline to continue. If you are legitimately licensed, there is a place for you. But there will be no concessions in terms of adherence to rules and discipline. We have to bring greater order."

The minister also announced three "major, exciting projects" that will emanate from the ministry that would bring in investments of over US$1 billion over the next three to five years.

"These investments will require no counterpart funds from the Government of Jamaica, but are based mainly on our country's strategic location," he said. Despite prompting, Davies declined to go into details, but he pledged the projects would enhance economic activity and create jobs. He promised that more information would be available at the end of the month.

"The effects of both the international economic environment and the depressed local economy continue to place the most disadvantaged of the society under stress. It is within that context that the administration has developed, and will fully implement, the JEEP." He promised total commitment to accountability and transparency in the design and implementation of this project. He opined that the ministry would have a big role to play in reconstituting economic activity in the country.

"That ability to play this role successfully will be dependent on providing efficient services to the public as well as to assure those who wish to do business with the State that they will be treated in a courteous and efficient manner. He said he hoped the CEOs in attendance would collaborate to move the country forward."