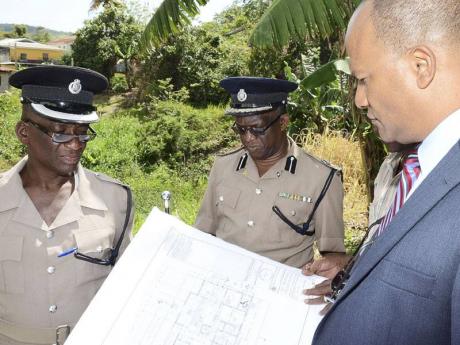 Minister of National Security Peter Bunting (right) reviews plans for the construction of a new police station at Newport, Manchester, during a tour of the old station last week. Others (from left) are: Head of the Mandeville Police Station, Superintendent Lascelles Taylor, and Assistant Commissioner of Police Derrick Cochrane. - CONTRIBUTED

MINISTER OF National Security Peter Bunting has given commitments to discontinue the practice of housing derelict vehicles on the compounds of police stations and to increase the fleet of vehicles for the security forces.

In a recent tour of police stations in St Elizabeth and Manchester, the minister warned persons who have unclaimed vehicles at the nation's police stations to make every effort to collect them.

"I would tell anybody who has a vehicle that they still have an interest in to make arrangements to collect it now. Almost every station that we go to, there are large amounts of old, derelict vehicles; it isn't appropriate, in keeping with the whole professional image that we are determining."

To solve the problem, Bunting said a project will be created centrally to drive the process, which will include placing notices in the press, giving persons the opportunity to claim them, which if ignored will result in the disposal of the vehicles.

Bunting also said mobility of police personnel is a problem across the island.

"We need about 300 vehicles in the coming year if we are going to make a serious dent in the requirement," he noted.

He acknowledged that although inadequate, it would give the security forces a substantial boost. Bunting promised to prioritise this need within the coming fiscal year. The security minister said some of the vehicles could be acquired though funds seized under the Proceeds of Crime Act.