Disasters of the city - The making of a city - Pt III 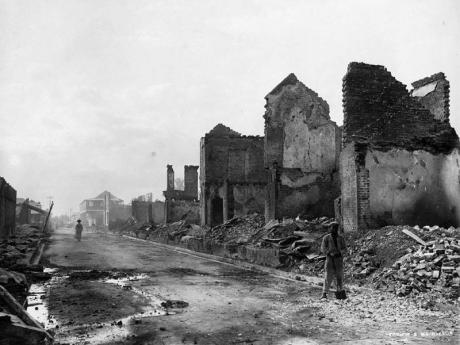 Tower Street was not spared the wrath of the 1907 earthquake. This photo was taken on January 14, 1907. - Photo: Courtesy of the National Library of Jamaica 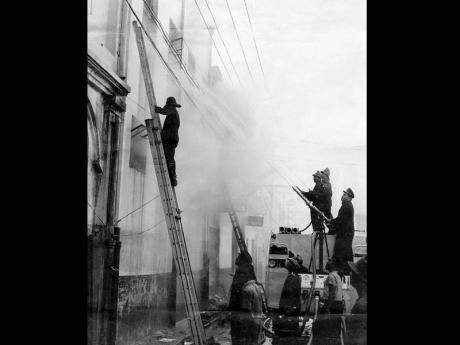 Firemen play their hoses through the window of a burning building. 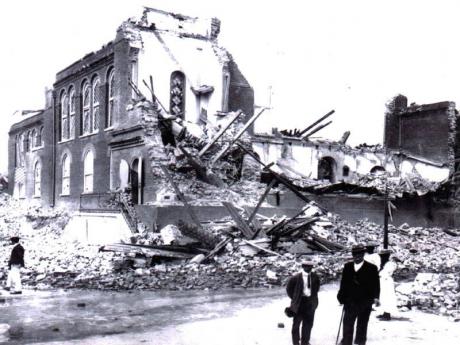 THE DEVELOPMENT of Kingston was hindered by a series of disasters, each of which did considerable damage to the city. Fires in 1780 and 1782 severely damaged a large portion of the town and sections between King and Orange streets were destroyed. Another fire a little over 50 years later, known as the Foundry Fire of 1843, ruined buildings diagonally across the city, starting at a foundry situated at the east end of Harbour Street to the Roman Catholic Chapel at the corner of Duke Street.

The city suffered yet another setback in 1850 when approximately 4,000 people, roughly one-eighth of the town's population, died in a cholera epidemic.

Unsanitary conditions aided the spread of the deadly disease which started in Port Royal. According to Clinton Black, author of History of Jamaica, some 32,000 people (one in every 13 of the population) died islandwide, yet Jamaica was still fortunate; in other parts of the world, the death rate reached as high as 50 per cent of the population.

Fire again destroyed many of Kingston's best buildings in the 1862 Fishers Fire, which started in Fishers Bakery on Harbour Street. All the buildings at the south-east corner of Harbour and King streets were destroyed.

The flames consumed the vegetable market at the bottom of King Street, later named the Victoria market, and many counting houses, which, in the absence of banks, carried out the financial transactions of the island, as well as rum stores, shops and wharf premises which stored vast quantities of produce ready for shipment abroad. In all, 19 of the principal stores on Harbour and Port Royal streets were destroyed. Only the buildings of Charles Levy and Daniel Finzy on Port Royal Street, which were fireproof, escaped the fire. Efforts to put out the fire were hampered by water lock-offs and low water pressure.

The city rebounded quickly, but faced another setback when, in December 1882, a large section of the city's business district was destroyed by fire. The total number of houses entirely destroyed was 577 and loss was estimated at between £150,000 and £220,000.

Once again, the city recovered and stronger buildings made of brick, with metal roofs, were put in place of the older wooden ones.

In addition to the destruction wrought by fires, Kingston also suffered great damage from an earthquake on January 14, 1907. It was accompanied by a fire that took a week to burn itself out. Much of the same area as that devastated by fire in 1882, was destroyed in the fire of 1907, and this was compounded by the earthquake damage.

Loss of life was estimated at between 1,000 and 1,500 persons. The value of property destroyed amounted to between £1,000,000 and £1,500,000. After much negotiation, the insurance companies agreed to settle the claims to the extent of 85 per cent on the face value of the properties and the money was distributed in 1909.