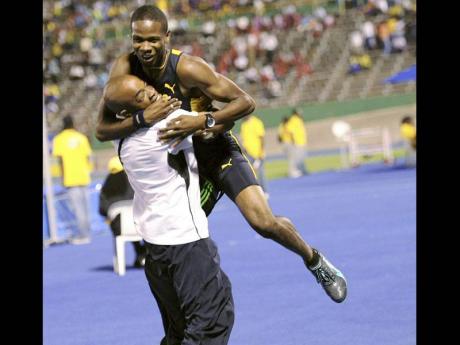 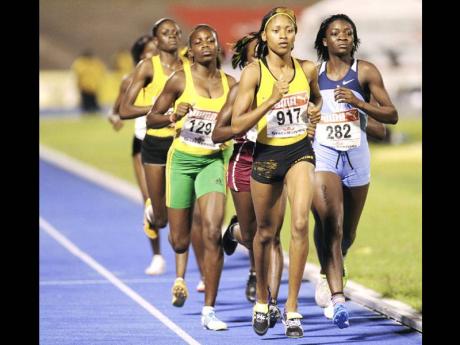 Simoya Campbell (No. 917) of Spaldings High leads the field on her way to winning the Class One girls' 1500 metres final.
1
2

Last week, I pinpointed Simoya Campbell, Ashinia Miller or Kimberly William-son as student-athletes who could move from Champs to the London Olympics.

At Boys and Girls' Championships last week, they endured mixed fortunes, with only Campbell winning gold.

Campbell, the Spaldings High star, first won a tactical Class One 1500 over steeplechase winner Desreen Montague of new champion girls' school, Edwin Allen High. She returned on Champs Saturday to hit the gas in the 800 to win in two minutes, 05.22 seconds.

Miller, the Calabar strongman, played second fiddle to his teammate, Federick Dacres, in the Class One throws. As expected, Dacres, the world youth champion, took the discus, but he added a surprising shot put victory over Pan-Am Junior champion Miller.

Williamson lost a fine Class One high jump contest to World Youth long jump winner Chanice Porter of Manchester. Both broke the record set at 1.83 metres by Peaches Roache in 2003, with clearances at 1.84. Porter went on to fly over 1.86 metres.

The disappointment endured by Miller and Williamson might boost their chances for summer glory in Barcelona, the host city of the 2012 World Junior Championships, or in London. In fact, the setbacks could serve as springboards to success.

Champs revealed one other athlete we might see in London. Munro's Delano Williams is now the holder of a British passport. His wind-hindered Class One sprint double might send him on his way to the Great Britain Olympic team.

He and Nethaneel Mitchell-Blake of Jamaica College (JC) will almost certainly be teammates in Barcelona.

Mitchell-Blake, now a two-time Class One 200 finalist, was in the World Youth semis last year.

Spare a thought for Carlton Cousins, Calabar's former Class Three 400 champion. In a scene reminiscent of the recent World Indoor Championships, he was left in the 'on your marks' position when the gun fired for the Class One final. One conclusion is that the loudspeaker in his blocks wasn't working.

The only person who can commiserate with Cousins is Lerone Clarke. He suffered in the same way in the World Indoor 60-metre heats.

That wasn't the only scratch on the surface of a great Champs. For various reasons, three running events were contested as timed finals on Champs Saturday. In the most extreme case, the girls medley was commuted to a three-section timed final, with the winners of each race running solo against the clock.

Apparently, one of the three heats had been run from the wrong stagger.

In a meet where head-to-head rivalry tests competitors, fans were robbed of the entertainment they paid for. Since medley team members can't run any other events at Champs, it should have been possible to run the heats again, perhaps at 9 a.m. on Champs Saturday to give everyone a chance to recover for the final.

In the Class Two 4x100 boys final, which was run in two sections, the 'fast' section was contested first. JC ran brilliantly to the fastest time ever by a Class Two team, 40.75 seconds. The second heat, timed in 43.10, should certainly have preceded it.

Thankfully, Cousins didn't leave Champs empty-handed. He ran the first leg of a 4x400 race that encourages the view that Jamaica's fortunes in that event are on the rise again. Calabar won in three minutes, 10.19 seconds.

That's the third-fastest time ever at Champs. Only the 2007 St Jago team - with Yohan Blake, Riker Hylton, Nickel Ashmeade and Adolphus Nevers; and the 1990 Calabar quartet of Chris Gallimore, Everton Rhoden, Hugh Powell and Daniel England have better times at Champs.

Cousins played his part with a lead-off leg that compares well with the winning time in the Class One 400 metres. His teammate, Javon Francis, won the flat event in 47.58 seconds. Cousins' first leg took 47.5, and while relay split times are generally faster than flat times, the first leg is directly comparable because the lead-off runner starts from the blocks and has to build speed from zero.

The disappointment endured by Miller and Williamson might boost their chances for summer glory.