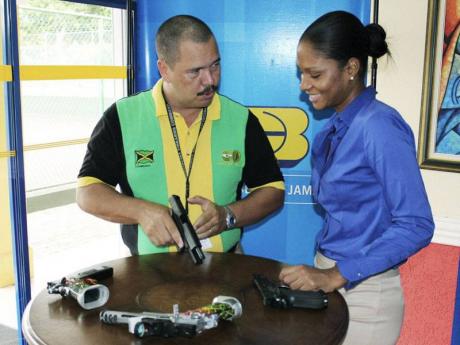 Al Stewart (left), range master for the NCB/JRA Jamaica Invitational Pistol Tournament, shows NCB's Sade Powell some of the pistols to be used in the event slated for April 14, during the launch at the NCB Sports Club yesterday. - Contributed

Two-time world champion Chris Tilley is among 12 overseas participants that have been confirmed to participate in the second staging of the National Commercial Bank (NCB)/ Jamaica Invitational Pistol (JIPT) Tournament.

The event will be held at the Jamaica Rifle Association (JRA) on Mountain View Avenue on April 14.

Tilley, who is also a two-time United States (US) champion, will be aiming to win the competition for the second consecutive time.

Among the other overseas competitors who are down to compete in the tournament are Rory Wilson of the US, Canadian pair of Jean Phillippe Drolet and Richard Ho, Cayman Islands' duo of Andrew McBean and Charles Ebanks, and Jeremy Wingson and Dale Signh both from Trinidad and Tobago. Over 60 other entrants from the JRA will also participate in the tournament.

Murdock, who finished third in the competition last year, said he would be going al out win this year's tournament.

"I am feeling pretty confident," said Murdock. "I don't think it will be that difficult because I have been training somewhat and I will be leaving the island next week to do some training for the tournament," he said.

"NCB is happy to be on board again for this spectacular event. Last year, both NCB and the JRA took the sport of tactical shooting to new heights, and this year we look forward to bringing even more recognition for this sport," said Patrick during yesterday's press launch, which was held at the NCB Wellness Centre on Phoenix Avenue.

"Though not one of the traditional sporting activities in Jamaica, pistol shooting has a significant fan base both locally and abroad," Patrick said. He added: "We believe that Jamaica's sports offering should be diversified in order to attract fans and participants from all disciplines the world over, and our continued support of the JIPT and the JRA is a step in this direction."