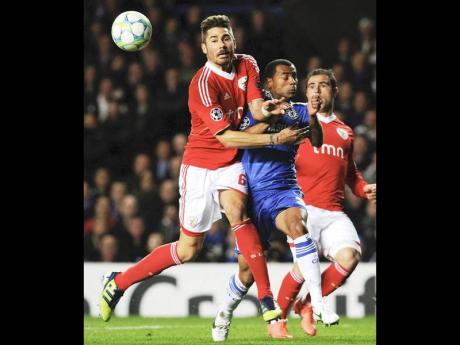 Chelsea will face holders Barcelona in the Champions League semi-finals after unconvincingly eliminating 10-man Benfica with a 2-1 victory yesterday.

After winning 1-0 away last week, Chelsea's advantage was extended by Frank Lampard from the penalty spot in the 21st minute.

But Chelsea failed to make their man advantage count after Maxi Pereira was sent off in the 40th minute, with several clear-cut chances squandered after the break.

And it was a nervy conclusion to the quarter-final at Stamford Bridge after Javi Garcia headed Benfica level on the night in the 85th minute.

Another goal would have sent Benfica through on away goals but Raul Meireles blasted the ball into the net on a counter-attack during tense stoppage time to secure Chelsea's 3-1 aggregate win and deny the visitors a first European Cup semi-final appearance in 22 years.

Despite being the last English club standing in Europe, the Blues are only fifth in the Premier League and outside the top four Champions League qualification places.

Chelsea will be thankful that the visitors matched their lack of ruthlessness up front despite flashes of flair throughout the match from a Benfica side lacking any Portuguese players from kick-off.

While Joan Capdevila had to throw himself at David Luiz's eighth-minute strike to deny Chelsea an opener, there was more endeavour from Benfica.

But the quarter-final turned further in Chelsea's favour after Javi Garcia's challenge on Ashley Cole in the penalty area led to Lampard netting from spot.

At the start of the second half, Cech blocked a left-footed curling attempt from Cardozo, while Pablo Aimar found the space to strike into the side netting.

Salomon Kalou should have doubled Chelsea's lead, but his shot lacked the power to find its way into the net and Ramires failed to push the ball into the open net.

Fernando Torres also saw a shot deflected away from the goal by Emerson, while Juan Mata flashed the ball across the face of goal in the 70th from a tight angle.